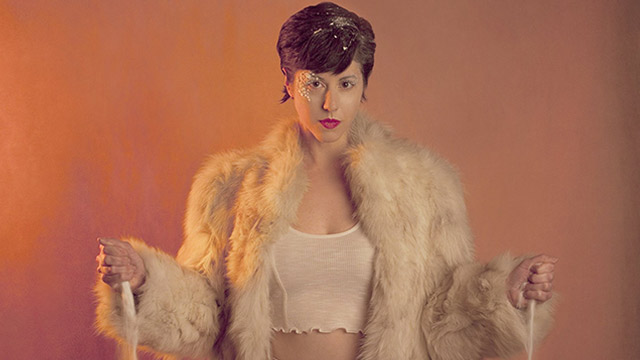 ​On her upcoming new album, Salt, Boston-based musician and performer Ruby Rose Fox tinkers with experimental production techniques, ponders art made by difficult individuals and embraces the world of ASMR. Experimental pop tracks like "Charlottesville" and "Lady Godiva" glance at modern American unrest, while she builds off of Lou Reed's two "Caroline Says" songs to explore the implied violence towards women in both the original songs and in Reed's life.

Fox also took a different path when it came to recording, bringing the third dimension into her music by using special microphones that capture the position of sounds and create a sense of movement in the songs, which will be highlighted in an upcoming surround sound listening session at the Museum of Science in Boston. Fox spoke with us about her various vocal techniques, writing songs that reflect the current moment and her fascination with the world of ASMR. Salt comes out on June 22.

AllMusic: You use a range of vocal registers; as you write a song, do you know which voice you'll be using?

Ruby Rose Fox: That was a constant talk and negotiation, what key something should be in. It always depends on what you want your highest and lowest notes to sound like, so I think all the way up until the studio, and even in the studio, we were constantly like, “Should it be in this key, should it be a little higher or lower?” That was a process that continually went on until I felt it was somewhat right.

AllMusic: Where did these songs start, with words or with musical ideas?

Fox: I strangely kind of do it all together. If you make the music first, the lyrics tend to be kind of cookie-cutter, and if you do the lyrics first, the music can get a little weird. I try to feel it out as I’m writing. I wouldn’t say either came first, I try to integrate that process.

AllMusic: Naming a song "Caroline Says III" is certainly a statement, did you debate the pros and cons of that?

Fox: You mean in terms of pissing off Lou Reed’s dead spirit?

Fox: I didn’t think too much about it, because it felt like a genuine response to his songs. I didn’t feel like I was inviting comparison to Lou Reed, it was more of a #MeToo moment of feeling that there are a lot of older songs written by men with a lot of violence towards women in them, by some of the greatest songwriters ever, like Lou Reed. It’s just there. Are we going to censor music now and erase things we don’t like?

When he died it came out that he had been abusive, and there were a lot of really disappointing things about him. My response is that there’s no sense in erasing the work, but I do think that it’s important to respond to it. And by responding to it, you change the syntax of the sentence. Caroline is referred to as a German queen, she’s Aryan, and it’s definitely an abusive relationship. In the song she says, “Why do you hit me?” Every artist has a right to create their work, but I also feel that women are starting to respond in a different way to everything, to absolutely everything.

AllMusic: You felt that, and it was impossible for you to not tap into it.

Fox: I think before, I would have been looked at as this big feminist, but now a lot of women are starting to explore where the injustices are, and I think it’s becoming more socially acceptable to do that. So I didn’t doubt my decision that much, because I think I have every right to do it. Any guy has a right to write about hitting a woman in the face, or calling women bitches and hoes in songs, but I also have a right to respond to those songs, if I choose to do so. And I have a lot of respect for Lou Reed, I think he’s a really amazing artist. So it was sort of my battle with that.

AllMusic: "Lady Godiva" has a different bounce than the rest of the album, where did that come from?

Fox: Last summer I was on tour and my piano broke in the middle of the tour and I had to get a new keyboard. The keyboard I got just had more stuff in it, it was more complicated, and I discovered the arpeggio button. So that song was created by just me exploring this new instrument with new technology that I didn’t have before, and I created this rhythmic pattern. A lot of the songs are made without a click track, so I’m purposefully creating songs out of time.

AllMusic: You have an affinity for song titles that are either very direct or almost tell short, mysterious stories. Do you labor over those?

Fox: I think I labor over them a little, I usually have three titles for one song, and by the time we make the record I have to make a choice. I think I wanted to call “Charlottesville” “Baptize Me in Pepsi-Cola,” but if I didn’t call it “Charlottesville” it wasn’t going to be as clear what I was singing about, and there wouldn’t be much of a way to piece your way back to the intention of the song. I was forced to name that “Charlottesville” because I wanted the listener to understand it, and if I didn’t care, I would have named it something else.

AllMusic: Another aspect of the record is trying to provide physical sensations via ASMR techniques [autonomous sensory meridian response: specific sounds that cause tingling sensations in certain listeners]. Did you listen to any music growing up that caused that in you?

Fox: I always say that my favorite singer as a kid was Roy Orbison. I don’t think he’s necessarily ASMR-sensitive, but I think it has more to do with his operatic quality. The ASMR microphone is interesting because it picks up sounds that a certain group of people are very, very sensitive to. Some people aren’t as sensitive, so they have no idea what these crazy people are talking about. It’s pretty recent that there’s been this YouTube phenomenon of ASMR videos, of people making them to trigger very targeted responses. But I don’t have the response as strong as a lot of people I know, I have friends who are super sensitive to it, and didn’t even know what it was until they were older, they just had this thing happen in their bodies when they heard certain sounds.

AllMusic: I feel like there's a misconception that ASMR is just whispering.

Fox: Yeah, it’s a lot of different kinds of sounds, not just whispering. There’s also another element, there’s visual ASMR, which you can be triggered by seeing another person basically just giving you very intimate attention, which is fascinating in its own right. So there’s a lot more than whispering for sure. It’s lighter sounds, you’re not going to get triggered by metal or punk rock, because the sounds are just different frequencies.

AllMusic: During the recording, you would make use of your physical positioning in relation to the microphone to create a sense of movement. Were you inspired by any stories of production trickery from the past?

Fox: Actually, very admittedly, I know so little about production and am not actually interested in all that stuff. I have friends who go deep into production mythology and books and everything that went down with every record, and I’ve never cared. But I did start to care because I was interested in binaural microphones, which is what they use for virtual reality. I watched a demo of this one microphone, and it’s basically an omni microphone, it can track movement. Say you were passing someone in the street with this microphone, it would sound like they were coming towards you and going behind you, to your left hand side. That was really interesting to me, so I was like, “OK, what would happen if that happened with a lead vocal, or backup vocals?” So on a lot of the songs, I was moving around the microphone while doing both the lead and backup vocals.

AllMusic: Adding the third dimension into music sounds like a potentially stressful undertaking.

Salt can be pre-ordered here.

Waxahatchee's Katie Crutchfield Gets Honest With Herself on 'Out in the Stor ...

Waxahatchee's Katie Crutchfield Gets Honest With Herself on 'Out in the Stor ...