It goes without saying that a music movie lives or dies by its music, but it's particularly true with pop music parodies. If the music doesn't hit the right notes -- if it doesn't feel like the period it's meant to evoke, if the humor is either too broad or dry -- the movie crumbles around it, to say nothing of the soundtrack, which will be hard-pressed to stand on its own as an album. The gold standard for rock comedies is This Is Spinal Tap, as the music felt authentic, and Christopher Guest, Harry Shearer, and Michael McKean proved that lightning could strike twice with their folk music saga A Mighty Wind. The soundtrack to the John C. Reilly-starring Walk Hard: The Dewey Cox Story belongs in such rarefied company. Like Spinal Tap, Walk Hard sets the bar high by attempting to create many sounds from the past, but where the Tap pretty much confined themselves to a bit of Merseybeat and psychedelia before settling into a metallic groove, the whole point of Walk Hard is to trace Reilly's Cox character -- based chiefly on Johnny Cash -- through the ins and outs of the '50s, '60s, and '70s, so there are more sounds here and thereby more pitfalls, all of which the music-makers miraculously manage to avoid. This is especially remarkable because the 15 songs on Walk Hard evoke many different artists: there is naturally Johnny Cash on the title track, the mariachi-flared "Guilty as Charged," and the cheerfully vulgar Johnny and June take-off "Let's Duet," but there are also two takes on Elvis ("[Mama] You Got to Love Your Negro Man," "[I Hate You] Big Daddy"), three on Dylan, Roy Orbison on the grandly melodramatic "A Life Without You (Is No Life at All)," and the Everly Brothers-styled "Darling," but this also leaves old-time rock & roll behind with the Beach Boys psych-pop pastiche "Black Sheep" and, bizarrely, a disco spin on David Bowie's "Starman." That's a lot of ground to cover, but the songs work as music while still being funny. Sometimes, the jokes are big and obvious -- the double entendres on "Let's Duet" are hardly subtle -- but sometimes the humor is a bit sly, as on "Royal Jelly," which nails Dylan's stream-of-conscious romantic writing. Of course, that song wouldn't work if it weren't for John C. Reilly's delivery; he mimics the particulars of Dylan's cadence with the grace of Cate Blanchett, and his fine ear for detail is evident throughout this soundtrack, as he negotiates the twists and turns of the music with ease. Such a performance would be admirable if the songs weren't good, but since they're very fine, his singing helps turn Walk Hard into that rarest of things: a parody album that's almost as addictive as the real deal. 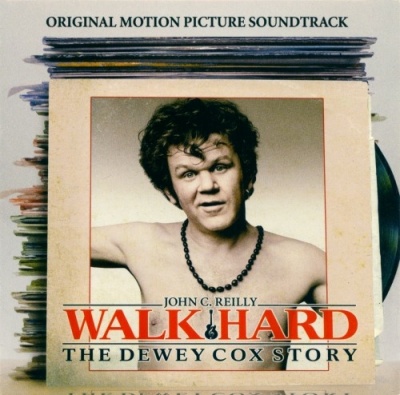