If your first reaction on hearing about a musical called Urinetown is that that's an awful title, don't worry, the authors are way ahead of you. Its awfulness is the point, and Urinetown is as much a musical about a musical as it is, well, a musical. The opening song, for example, is called "Too Much Exposition," and in it, Officer Lockstock (Jeff McCarthy), who acts as the narrator, explains "the central conceit of the show," which is that, in a mythical town suffering a drought, "everyone has to use public bathrooms" and pay high fees, a story line Little Sally (Spencer Kayden) describes as "bad subject matter." Urinetown might as well be called "Allegory-ville," you see, even though that wouldn't be as repulsive -- and therefore as provocative -- a title. Lyricist/librettist Greg Kotis clearly has spent a lot of time studying Bertolt Brecht, and composer/co-lyricist Mark Hollmann is a big fan of Kurt Weill, so that Urinetown's clear antecedents are shows like The Threepenny Opera and Weill/Brecht disciple Mark Blitzstein's The Cradle Will Rock. The story is about the evil rich and the hapless poor, and the authors draw equally from the Depression era of the 1930s and the naïve idealism of the early '60s, casting several of their songs in the folk/gospel style of the freedom songs of the civil rights movement. But they also have absorbed a heavy dollop of the political cynicism of the late '60s; another obvious influence is Frank Zappa, especially in his own unproduceable anti-musical, Thing-Fish. But it's one thing to have all those influences, and it's another to write up to their level, which, amazingly, Kotis and Hollmann have done. Title, subject matter, and attitude aside, Urinetown is full of inventive melodies and clever lyrics, and they easily put over its smirking nihilism. 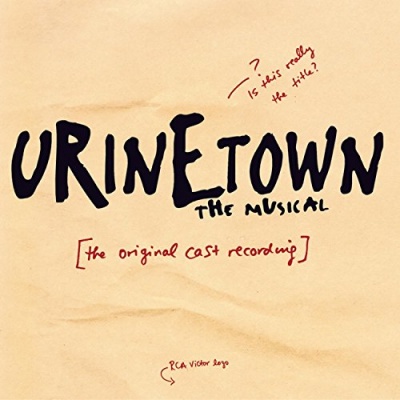