Throughout the 1970s, CBS Masterworks teamed up with composer and musicologist Gunther Schuller on a number of projects relating to American music of the early 1900s. This association resulted in a few albums now regarded as classics of the genre. This one, Turn of the Century Cornet Favorites, highlights the awesome talent of ace trumpet player Gerard Schwarz.

At the turn of the century and well before, brass bands were the central disseminators of music to the public in America. During the summer, public parks in every country hamlet were filled with the music of local bands, and the large city parks hosted the famous touring ensembles of the day -- those of Patrick Gilmore, John Philip Sousa, and others. Each of the bands featured star soloists who were exceptionally skilled, in many cases on the cornet, but also trombone, saxophone, and other instruments. Performers such as Herbert L. Clarke and Bohumir Kryl, whose works are featured here, were stars within Sousa's band and among the musical heroes of the day. Turn of the Century Cornet Favorites both evokes and transmits the traditions of this bygone era.

Gunther Schuller has added short transitional pieces in order to flow one piece into another, in keeping with the usual standard in band concerts of the era. There are no marches here -- just solo and display pieces, and each tend to consist of a slow and a fast section. While listening to the whole thing at once may work, a break taken between tracks 11 and 12 is not a bad idea in order to keep it fresh. Sony has done us all a wonderful turn by adding two pieces from the master tape left off the original album, resulting in a CD that is preferable to the original LP release in every way, although in terms of sound that wouldn't be difficult, given the poor quality of CBS Masterworks' vinyl pressings in those years. Since the time of Turn of the Century Cornet Favorites, Schwarz has permanently moved into the field of conducting, leading the Seattle Symphony Orchestra, and it has been a long time since he picked up his instrument in public. Thus, Turn of the Century Cornet Favorites affords a glimpse of Schwarz's mastery at its peak, not long before he closed his up trumpet case in order to pursue more pressing matters of musicality. 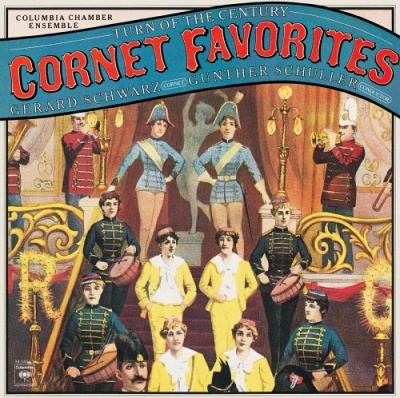