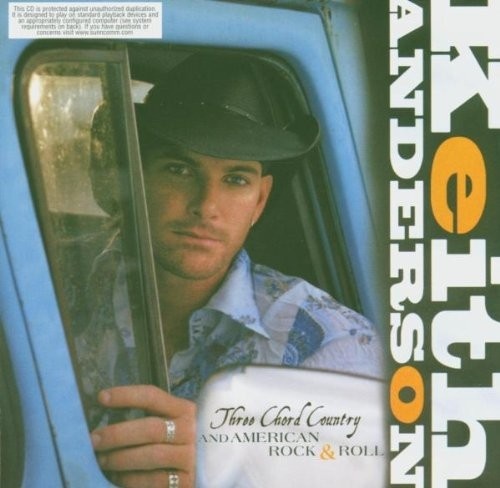 "Even before joining Arista, Keith Anderson had endorsement deals with Jim Beam, Bud Light, Gibson Guitars, GooGoo Clusters, Jodie Head, Jim Dunlop brand guitar processors, Nady Wireless Systems, and Elixir Strings. He has successfully self-marketed his own CDs and merchandise. Music Row magazine once dubbed him 'an industrial-strength hunk' for his physique, blue eyes, and dazzling smile," reads Arista's press release biography for Keith Anderson's debut album, Three Chord Country and American Rock & Roll. In other words, Anderson is a tailor-made corporate country pinup, possessed of bland, male-model good looks and ready, even eager, to sell himself to any tall, dark multimedia conglomerate that bats its wallet in his direction. Which is pretty much all you need to know about him, other than the fact that he also wrote "Beer Run," a giddy "White Lightning" update recorded as an infectious duet between Garth Brooks and George Jones in 2001. Any good will that tune might have engendered is washed away by the glitzy, XXL-sized, calculating, and utterly nauseating arena country of Anderson's 2005 debut, Three Chord Country and American Rock & Roll. Anderson is not unskilled as a writer, as "Beer Run" proved, and those talents flicker to the surface on occasion during the course of Three Chord Country, usually on the ballads or the calmer mid-tempo tunes like "Plan B." But those are just fleeting moments on an album that's devoted to fist-pumping, pandering choruses, product placements, saccharine sentiments, and a crass romanticization of a fictionalized small-town life where everybody is driving trucks, tailgating, drinking beer, picking wildflowers, and just having a damn good time being good Americans. This isn't music reflecting life and how Americans live it, this is music selling a lifestyle. Anderson fetishizes material items and name-drops well-loved musicians like Hank Jr., Tom Petty, ZZ Top, and Aerosmith -- because if he sings their names, maybe the unsuspecting listener will think he's in their league, or an heir to their throne. If Anderson had one ounce of charm, the cynical machinations behind his music wouldn't be quite as transparent, and they might even have a touch of the devil-may-care, gonzo humor of Big & Rich, whose John Rich co-writes three songs here and produces the title track. But Anderson is charmless and pedestrian, sounding self-satisfied and entitled as he sings ditties that are intended as a soundtrack to everyday American life but sound like a pitch for either a Coors Lite or Mountain Dew ad (whichever pays the most). Since he's pretty and sings music that's designed to fill space between commercials on corporate radio, Three Chord Country will be a hit, which may be appropriate because it does indeed capture a certain cold, hard truth about mainstream music at the midpoint of the 2000s -- it's processed, paper-thin, and forgettable, but not only does it make no apologies for its disposable nature, it sells itself with a big grin, pleased that it's pulling one over on an audience that will buy any piece of crap just as long as it looks nice and familiar.