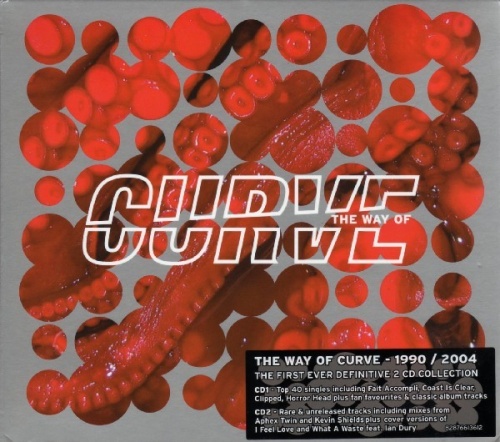 Curve thrived on contradictions. They were at their sexiest when they were at their ugliest; they were at their most cathartic when they were at their most claustrophobic; they were at their sleekest when they were at their most layered. Curve were also, in a roundabout and involuntary way, considerate: had they been more concerned with melodies and a little less so with textures, Garbage wouldn't have been necessary -- in turn, that later band's members would have less money in the bank. Curve's blurred textures, created in part by guitars subjected to a battery of effects, led to frequent classification as shoegaze, but their sound -- reliant on pounding/driving/pulsing rhythms generated by both machines and humans -- put you in a chokehold, not a daze. There were steady torrents of vroom and oomph, and Toni Halliday's confrontational lyrics and vocals were more likely to pierce through the din than melt into the background. They were certainly dark and yet were hardly goth; they were set up like a rock band but were essentially a dance band. The Way of Curve is the most representative of the band not for its set of wise selections, but for the fact that it's as difficult to classify as the band itself. It lands somewhere between a beginning and an end, not quite a proper beginner's guide while falling short of being a gap plugger for those seeking all the elusive B-sides. The first disc, covering the band's first A-side through its most recent recordings, does include many of the best moments, but a few essential tracks are neglected in favor of too much later, lesser material. (Right around the major-label comeback single, 1997's "Chinese Burn," it became evident that the musical climate had finally caught up with them.) "Pink Girl With the Blues," a low-key, independent-label comeback single from 1996, is one of the most significant inclusions, since many longtime fans have gone years without ever hearing it. Storming and seething, it rightfully belongs on this first disc, pitting Throbbing Gristle/Moroder-like percolations against a kinetic, snarling flurry of guitars. The second disc rifles through B-sides and obscurities, beginning with "On the Wheel." That song is Curve's own "Erotic City" -- meaning it's a B-side that many justifiably regard as the band's apex -- and you don't have to actually see The Doom Generation to know that the scene in which the song is used must be the best one in any Gregg Araki-directed film. There are negligible choices made with the remainder of this second disc as well, the greatest miscue being the favoring of the Aphex Twin mix of "Falling Free" over the far superior original. Even with these flaws, The Way of Curve provides plenty for any form of fan.