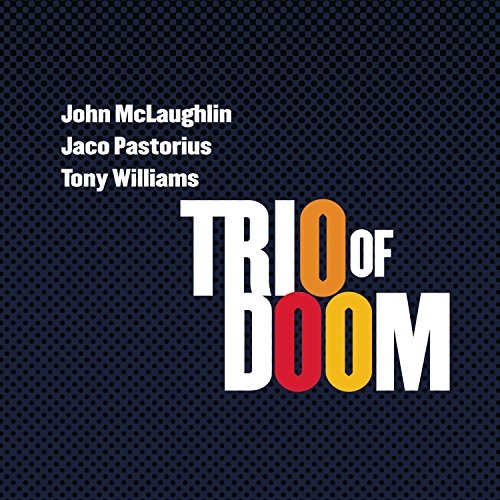 Certainly the potential of a recording by this trio featuring guitarist John McLaughlin and drummer Tony Williams (both members of Lifetime with organist Larry Young) along with bassist Jaco Pastorius -- aka the Trio of Doom -- is enormous. This compilation contains a performance of the trio at the Havana Jam in 1979, a U.S. State Department-sponsored cultural tour by a large number of American musicians who played on the same stage as Cuban aces. The band rehearsed and had about 25 minutes on the stage. Five days after leaving Cuba, the band reconvened in a New York City studio and recut most of the tracks. The studio versions (cuts six, seven, and ten) were released on a pair of various-artists compilations from the Cuban concert. McLaughlin felt at the time that the live performances were unusable because of Pastorius' playing. He relates the details in brief in the liner notes by Bill Milkowski. What this means, of course, is that out of ten cuts here, seven have never been released before. That said, the sum total of all the music that the group cut together is a little less than 40 minutes. From this, the opening drum solo by Williams takes up nearly three, and 20 seconds is of an alternate take of the drummer's "Para Oriente." But this is not a dodgy rip simply assembled to make money from the stuff of myth. Well, it is designed to make money from myth, but there is some seriously intense music here.

For starters, Williams' drum solo that opens the album is to die for. There is no excess, no showing off -- only an intense orgy of rhythm. When McLaughlin and Pastorius join him, the crowd must have gone crazy because he shifts nonstop into the guitarist's composition "Dark Prince." While his solo is overdriven, distorted, and rangy, full of angles and twists and turns, Jaco's playing on the head, and in taking the tune out, is solid. Perhaps at the time this didn't seem up to snuff, but it's hard to hear that based on the disc. The entire band is engaged with focused attention, ascending scalar and harmonic peaks together for its six and a half minutes. It is followed by a beautiful ballad by Pastorius called "Continuum," which appeared on his self-titled solo debut for Columbia. It's a gorgeous and deeply melodic ballad, and the bassist's playing is intensely soulful and lyrical. McLaughlin's chord shadings and voicings are not only supportive, they bring weight and depth, as does the beautiful hi-hat work of Williams. (Speaking of which, on "Dark Prince" and elsewhere, it's obvious that Williams is the true inventor of the blastbeat, not some generic heavy metal drummer. To hear his incessant bass drum and chronic cymbal-and-snare workouts is inspiring.) "Are You the One, Are You the One?," written by McLaughlin, closes the live set, and it's a funky, kinetic, and knotty jam with Williams playing breaks as well as pummeling the toms to get the funk up out of the thing. Pastorius' groove is incessant, even when he is matching the guitarist note for contrapuntal note. That's the good news. The studio versions of these cuts may "sound" better technically -- mostly due to the amplification and balance given the drum kit -- but they lack the raw edginess of the live sides. Still, fans of the fusion era, and those interested in any of these personas, will be much edified by what is found here. If only there were more of it.