The Sisterhood of the Traveling Pants [Original Soundtrack] Review

The Sisterhood of the Traveling Pants is a pretty standard, but also pretty enjoyable, collection of mostly singer/songwriterly, largely female pop. At its best, on tracks such as Natasha Bedingfield's sleekly playful, hopeful "Unwritten" and the hard-edged pop of the Faders' "No Sleep 2Nite," the soundtrack captures the earnestness and sass of being a teenage girl (or, at least, the film's approximation of that). Indeed, the diary-like intimacy of Alana Grace's "Black Roses Red" and Chantal Kreviazuk's "These Days" and "I Want You to Know" might be too painfully earnest for anyone but teenage girls, but they're still sweet, heartfelt songs. The earnest guys on Sisterhood of the Traveling Pants don't fare quite as well as the earnest young women, however; while William Tell's "Just for You" is more nondescript than bad, on Five for Fighting's oddly egotistical "If God Made You" -- which features the excruciating line "If God made you, he must be in love with me" -- the earnestness spills into sappiness (and creepy sappiness at that). For every overdone song like the Valli Girls' "Always There in You," which emphasizes the film's (and soundtrack's) chick-flick with training wheels vibe, there's a track like Rachel Yamagata's smoky, flute-and-accordion-embellished "Be Your Love" that gives young women, who are presumably the target audience for the film and its music, some credit for having fairly sophisticated tastes. Katie Perry's quirky "Simple" and Brandy Carlile's pretty, vaguely countrified "Closer to You" are two of the album's other standout tracks. The soundtrack might have been even better if it showed more sisterhood with an all-female collection of artists, but it's pleasant enough to work as a musical souvenir for fans of the film. 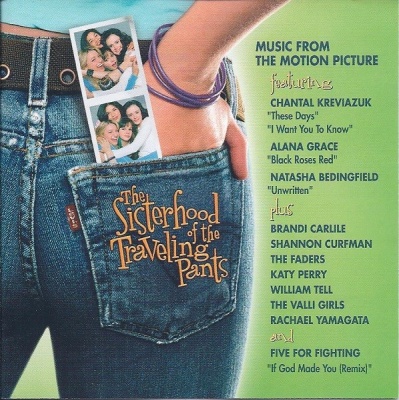 The Sisterhood of the Traveling Pants [Original Soundtrack] Album Information