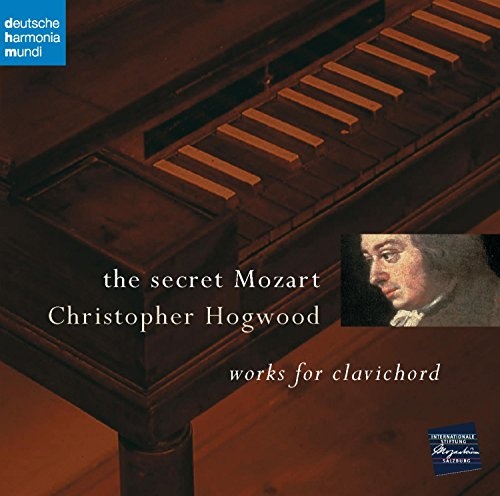 The Secret Mozart might more accurately be titled "The Not Ready for Prime Time Mozart"; it contains not hidden examples of Mozart's art but works that mostly, for one reason or another, made it out the door of his house. Thus, according to keyboardist and veteran historical-instrument specialist Christopher Hogwood, this makes them suitable for performance on the clavichord, which was an instrument Mozart kept at home and did a surprising amount of his composing on. The booklet notes tell a delightful story of a clavichord kept in the Mozart House in Salzburg, displayed with a note from Constanze Mozart saying that her husband used it in the composition of such masterworks as Die Zauberflöte and the Requiem in D minor. "The visitors' attention is likely to turn to the much larger fortepiano nearby," the notes (presumably Hogwood's own) read. "'Surely, …' you might almost hear them thinking, before they pass on to other rooms."

Of course, saying that Mozart worked on a clavichord is not the same as saying his music was intended for one. And the music on this album is a pretty motley collection of unfinished pieces, arrangements, short variation sets for household use (including some four-hand music), and other assorted oddities. The Adagio for glass harmonica, K. 356, is included merely because Mozart did not own a glass harmonica and thus "would surely have tried [it] out at home on the clavichord." Nevertheless, hearing a clavichord is unquestionably intriguing. The instrument takes one back to an ambient noise level that's almost unimaginable in the modern world, and here the buyer gets to sample not one but three different clavichords, including the one on display in the Mozart House. They have their own personalities, and all create an effect entirely different from that of a harpsichord -- though small (or perhaps exactly because it is so small), the clavichord has a more percussive sound, within its very limited world. The instrument has been closely and intimately recorded by Deutsche Harmonia Mundi's engineers, and Hogwood has a much more graceful way with Mozart than many of his Baroque-conductor contemporaries. Far from essential, but a good gift for the Mozart geek.