The Rite of Spring Review

Those familiar with the Bad Plus know that part of the group's aesthetic is to extend the context and reach of jazz as popular music. Earlier recordings have delivered provocative original compositions alongside standards, modern pop songs and jazz tunes. This album-length performance of Igor Stravinsky's iconic Rite of Spring extends their ouevre with a disciplined twist. Pianist Ethan Iverson, bassist Reid Anderson, and drummer Dave King have pared his score to its essentials and play the entire work. It has been honed for recording after over 30 live performances. The trio has taken its dense themes, tempos, tones, dissonant harmonics and timbres, and attempted to perform it whole as straight as possible -- without jazz improvisation, which doesn;t mean there isn't room for interpetive license. King is allowed the most interpretive leeway because Stravinsky didn't write for a drum kit. The century-old Rite of Spring is infamously known as an orchestral ballet that inspired a riot during its debut in Paris. Though it does commence irreverently with the electronic sound of a human heartbeat (and Anderson adds other ambient sonics throughout its first movement), the score remains the focus of the playing. Iverson sticks closely to the melodies, deftly playing different ones on each hand. He makes his way through the various themes with requisite force. Anderson's glorious pizzicato playing asserts itself in earnest in the last half of "Adoration of the Earth: The Augurs of Spring." It acts as a primary melodic instrument that plays counterpoint and executes other melodic tasks. The dazzling dance between the pianist and bassist becomes intimate and frenetic in "Ritual of Abduction," while King provides another dynamic dimension in embellishing his lower drums with snare-cymbal fills. His playing on "The Sage/Dance of the Earth" underscores the dance-like element with a brief circular rhythm as Anderson strides out of Iverson's execution of extended harmonies. The second part, "The Sacrifice: Introduction," commences on nearly mystical terms, holding the drama close and taut. Fierce percussive interludes and pulsing dissonances are rampant in "Glorification of the Chosen One." "The Sacrifice: Evocation of the Ancestors/Ritual Action of the Ancestors" offers ringing chords, rolling tom-toms, and an inquisitive, time-stretching bassline. Iverson's piano goes inside two melodies, drawing them out purposefully and passionately. King ramps up the tension to almost unbearable intensity until Anderson joins him and it explodes. In the final movement, Iverson's personally held assertion that Stravinsky was the father of prog rock is evidenced by shifting time signatures and emphatic chordal/melodic pulse sequences that seemingly contradict one another but don't. The Bad Plus' Rite of Spring is an incendiary yet deeply faithful interpretation that should be listened to by classical audiences as well as jazz fans. That this trio interprets such a difficult work with this degree of faithfulness is remarkable; that they do so without sacrificing their personality in the process is worth celebrating. 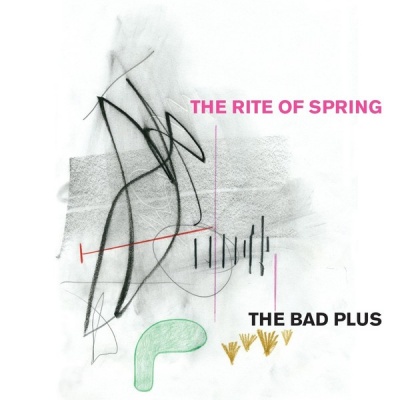 The Bad Plus Discography Browser

The Rite of Spring Album Information