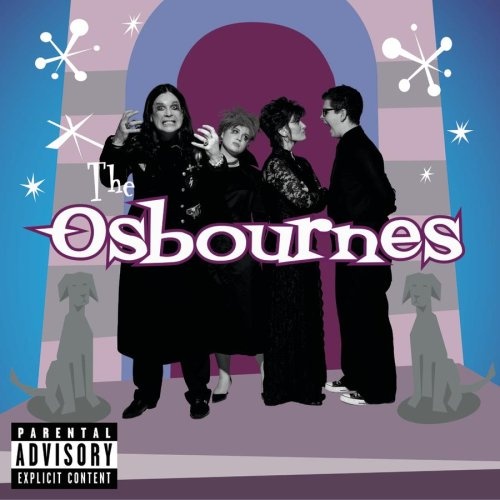 No one should mistake The Osbourne Family Album as an Ozzy Osbourne album -- it's the soundtrack to the ludicrously successful MTV reality sitcom The Osbournes and, as such, it plays to the unexpected crossover Ozzy and clan earned with the show, not his longtime fans. In fact, there are only three Ozzy songs here -- "Dreamer," a real nice ballad from his fall 2001 release Down to Earth (the album he was promoting when the show was shot); "Mama, I'm Coming Home," which his wife, Sharon, claims in the liner notes was written for her when he was on tour for a long, long time; and, of course, "Crazy Train," -- which is also present in Pat Boone's kitschy, loungey cover, since it is, after all, the theme of the series. The rest is a hodgepodge that attempts to replicate the feel of the show and the personalities of the family while offering career boosts to Osbourne children, Jack (he pushes Dillusion, a band he's been "developing over at Epic for a year now, so being as it was [his] signing, [he] thought including this song was only appropriate"; Dillusion is an American variation on Radiohead, which means there's a touch of metal to the guitars, and the arty moodiness has been replaced with earnest moodiness) and Kelly (singing a slickly hard-rocking cover of Madonna's "Papa Don't Preach," which is played straight and isn't that bad). Then, there's a bunch of other stuff that doesn't hold together musically, unless viewed as family favorites. The Kinks' "You Really Got Me" really got Ozzy into rock & roll, so it's here. Sharon remembers that daughter Aimee (who opted out of starring in the series) used to dance to the Cars' "Drive" as a child, so it's here. Kelly likes Starsailor, so a previously unreleased live version of "Good Souls" is here. Jack likes System of a Down, so "Snowblind," a song he believes "didn't get the recognition that it deserved," is here. John Lennon's "Imagine" is Ozzy and Sharon's song, so it's here, as is Eric Clapton's "Wonderful Tonight," which Ozzy used to play as Sharon got ready to go out. Although it's not noted on the back cover, there are a bunch of dialogue snippets from the show interspersed throughout the album, which throws the indexing of the record completely off (for instance, Dillusion's "Mirror Image" would be the ninth track, but it comes up as the 18th). Given the amount of dialogue and the number of different musical styles, this really isn't for anybody outside The Osbournes fanatic -- again, the show, not Ozzy -- but for those who love the show, this is a good aural souvenir.