The Day Has Come Review

Bearing a name only a pop ingénue could claim as her own, Cheyenne Kimball has long been positioned to be a pop star. She first surfaced as a winner on NBC's largely forgotten 2003 series America's Most Talented Kid, arriving just at the end of the teen pop boom and in the thick of American Idol mania, and she never has lost sight of her roots: when she got a little bit older, officially in her teens, she launched her career as a serious recording artist/entertainer by the only way she knew how -- she got her own MTV reality show documenting her struggle in launching a career as a teenage singer/songwriter. This was no small show for the network: it was given the prime slot of following the Laguna Beach spinoff The Hills. The show spent a great deal of time on the trials and tribulations of Cheyenne and her family as they left their home and settled in California in hopes of turning their kid star into a real star. Of course, the great unspoken thing in Cheyenne's show is that she already had the label deal in place, already had the system to promote her debut, already was set as an MTV star before her show started airing -- her album even had an insert promoting the fall release of the first season DVD of her show! -- making her the envy of pretty much any aspiring musician with dreams of stardom. And, of course, she got the show because she's cute as a button and writes commercial music, kind of like Jewel's younger sister or a baby Sheryl Crow who has a voice a little bit like an Ashlee Simpson who can sing. Based on that, it seems like Cheyenne could be a little bit insufferable, but the remarkable thing about the show is that her family comes across as desperate fame-crazed loons and Cheyenne is the little girl who likes to write and sing and shows a lot of promise, too (she also can be a brat on occasion, but what teen wouldn't on national TV?).

That's how she comes across on her debut album, The Day Has Come, too: she's earnest, green, and likeable, a better writer and singer than she initially seems. Part of the initial surprise comes from Cheyenne seeming so young and so cute -- based on her looks, it seems like she's just a pretty face that is easy to package and sell. But The Day Has Come showcases a singer and songwriter with considerable potential, and who is already making quite appealing music from the start. Some of this is due to an excellent choice of collaborators -- on this record she co-writes with such names as Kara DioGuardi, Chantal Kreviazuk, John Rich, and the adult pop specialist of 2006, Billy Mann -- who help shape her music into bright, shiny, hooky pieces of professional pop, equal parts frothy bubblegum, sassy punk-pop, introspective folk, and swaggering rootsy rock. It's an appealing sound on the surface, but the key to the album's success is that Cheyenne is an engaging performer. She certainly sounds her age, but unlike other teen singers, she can control her voice, giving it shading and texture, and she has a stronger musical foundation than such teen tarts as Ashlee, which helps give the album a backbone and depth. Upon the first play, it's easy to be taken in by its high-gloss production, which is admittedly quite fetching, but repeated spins reveal the sturdiness of Cheyenne's writing -- she had a hand in penning all the songs here -- as well as her ease at delivering the material. Sure, she still sounds like a teen, but that's the good thing about The Day Has Come: it has the musical scope of somebody in their early twenties, but the freshness and spunk of a teenager, which is quite remarkable. So maybe she did get an unfair advantage by being plastered all over MTV prior to the release of her debut, but this record is good enough to provide a compelling reason why Epic and MTV have staked so much on Cheyenne Kimball: based on this very good debut, she certainly does seem like the star she's positioned to be. 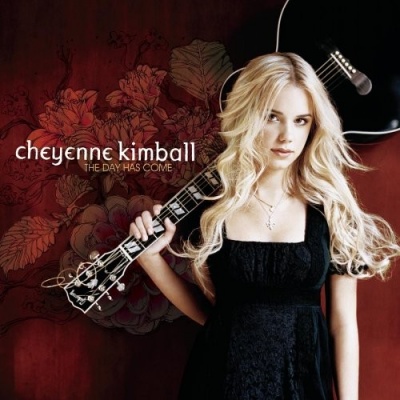 The Day Has Come Album Information

Girls Night Out Hanging Out Empowerment