The Bright Lights of America Review

Anti-Flag have been explicitly political punks from their earliest days, so the political themes of their eighth album, The Bright Lights of America, are entirely to be expected. What's different about this effort is not its topicality but its ambition and artistic reach: in some ways, it's the Pittsburgh band's equivalent to Green Day's American Idiot. Produced by, of all people, Tony Visconti, one of the grand old men of British rock record production best known for his work with David Bowie, The Bright Lights of America is a crystal-clear, razor-sharp album that never falls into mere empty bombast. The sound of the album is its first surprise: the distortion, overdriven amps, and lo-fi haze one expects from this style of punk are entirely gone, and orchestral overdubs and even a children's choir make appearances throughout these 13 songs. The second surprise is how these aspects serve to enhance the band's musical sensibilities rather than obliterate them. A solid set of spunky, powerful punk tunes complete with fist-in-the-air choruses, anchored by the title track, which may well be the band's most immediately catchy tune ever, The Bright Lights of America would sound like a complete sellout move were it not for how unflinchingly lead singer Justin Sane's lyrics stick to the anti-consumerist and antiwar critiques that have been the band's lyrical lifeblood from the beginning. It's tough to consider a song like "The Modern Rome Burning" as an attempt to court the teenybopper set. The neat thing about The Bright Lights of America, however, is that it sounds good enough that some of the Good Charlotte crowd might end up hearing it anyway. 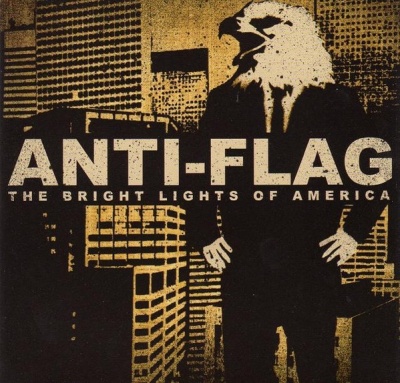