The Best of Louis Armstrong: The Best of the Hot Five and Hot Seven Recordings Review

The most important musician of the century past has had a trumpet-load of retrospectives appear since the 100th anniversary of his birth in 2001, and few are more brisk, enjoyable, shot full of goofy energy, and essential than the remastered reissue of The Best of Louis Armstrong: The Hot Five and Seven Recordings box set. The box is four CDs of remastered, priceless 1925-1927 Chicago work when Armstrong cemented his reputation as a player, singer, and most of all, an innovator without equal. Now it's occurred to Legacy that not everyone can shell out the big buckaroonies for bountiful box sets, even for a bonanza of 79 recordings of this kind of history. So they've kindly edited it down to a single disc, distilled to a succinct and smartly chosen 18 rambles. The "Hot 5" (originally Armstrong on trumpet; his wife, Lil Armstrong on piano; Johnny Dodds on clarinet; Kid Ory on trombone, and Johnny St. Cyr on banjo) and "Hot 7" (these five plus Pete Briggs on tuba and Baby Dodds on drums) that set down this remarkable booty were his Windy City studio band(s), a tremendous ensemble he didn't actually play with live -- despite having played with them going back to the 1922 King Oliver Band days, when he was second cornetist. Feeding off his missus' barrelhouse saloon playing and St. Cyr's rhythmic strumming (when they didn't have Dodds' drums), the three horns interweaving off each other helped make New Orleans Dixieland jazz the "up" music that could never die, as the leader's unforgettable solos on "Strutting with Some Barbecue" and "Potato Head Blues" are, in a word, thrilling. The opening "Heebee Jeebees" greatly exposed the world to Armstrong's skat singing, his staple until his death in 1971. More generally, the group (and his totally different 1928 "Hot Five" band, featuring his old, brilliant partner, Earl Hines, on piano) set the standard for the form that remains to this day. 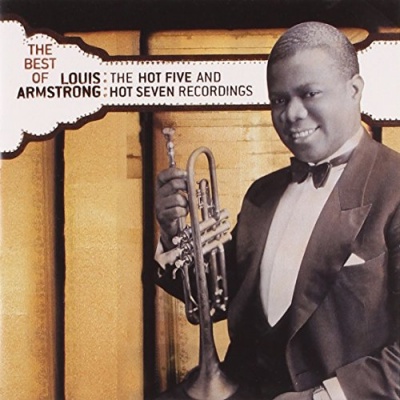 The Best of Louis Armstrong: The Best of the Hot Five and Hot Seven Recordings Album Information