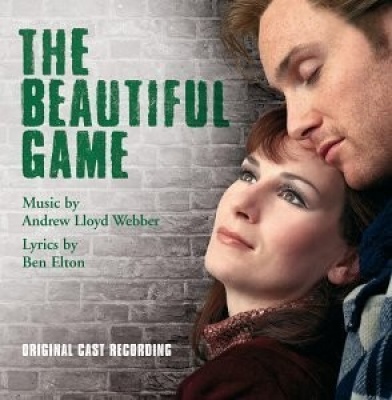 Andrew Lloyd Webber and Ben Elton's The Beautiful Game (which opened in London on September 26, 2000) is an original story set in Northern Ireland in the late '60s that concerns a team of teenaged football (i.e., soccer) players whose lives are derailed by the Irish Troubles. It's an unusually serious topic for Lloyd Webber and is driven by Elton, a playwright and comedian (though there are no laughs here). The late-'60s setting plunges Lloyd Webber back into his pop/rock roots in a style somewhat reminiscent of Jesus Christ Superstar, though he has also borrowed from other styles, notably the rhythmic, ominous music that film director John Carpenter composes for his horror movies. Elton excels at delineating character and giving a sense of the world of British sport, especially in the early going, though the result is that the original London cast recording carries a warning ("some lyrics may cause offence") and there is a fair amount of slang that will slow down American listeners. Actually, the show remains appealing until after the wedding and marriage night depicted early in the second act, but then the more heavy-handed aspects of the plot kick in and the musical begins to drag toward its inevitable "why can't we live together in peace" finale. Typically, conventional songs such as "Let Us Love in Peace" and "Our Kind of Love" were being emphasized around the time of the show's opening in the hope of scoring a pop hit, but the more impressive songs are the quirkier ones such as the triumphant drinking number "Off to the Party" and "Don't Like You," in which the main couple discover their interest in each other. It's a score to be enjoyed more in individual parts than as a whole, if only because, by combining sports, politics, and a Romeo and Juliet romance, Elton has more elements in the plot than he can handle effectively. Josie Walker, in the female lead of Mary, makes the strongest impression among the cast members, though they are all good singers.