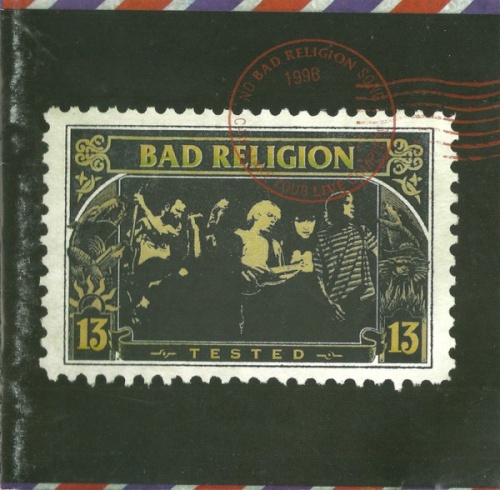 The first official Bad Religion live album is a bit of a letdown, too hung up on delivering an "absolutely live" document that is free of the bogus studio overdubs that make other so-called "live" albums frauds of the highest order. While that's an admirable insistence, in the process they forget what makes great concert LPs: a mixture of red-hot sound, fervid playing, and a "you are there" feel. By recording all the shows on their Gray Race tour, and taking more or less a song from each concert for this CD, they get the optimal performance of each song, but all continuity of sound is lost, as is the documentative aspect of one good show (i.e., you're not there). Worse, for all of singer Greg Graffin's crowing in the liner notes about the unique way the music was recorded -- bypassing the mixing desk -- the actual overall sound is merely average. It's crisp but not propulsive, with the drums too loud in the mix. In fact, several live recordings of the band from the B-sides of their 1995 import EPs blow this away. (And though it only covers the quintet's first and third LPs, BR's import live video, Along the Way, is also superior to Tested, and remains the true live document.) What a wasted opportunity. Nonetheless, with a band this top-notch, even such a merely passable, perfectly clear recording demonstrates their awesome punk prowess enough (especially that of singer Graffin, whose phenomenal pipes soar all over this) to make Tested a large pleasure just the same. Three unreleased tracks appear as well. One of them, "Dream of Unity," is uncharacteristically half-baked and slightly dull, but both "Tested" and "It's Reciprocal" burn the laser off the player.