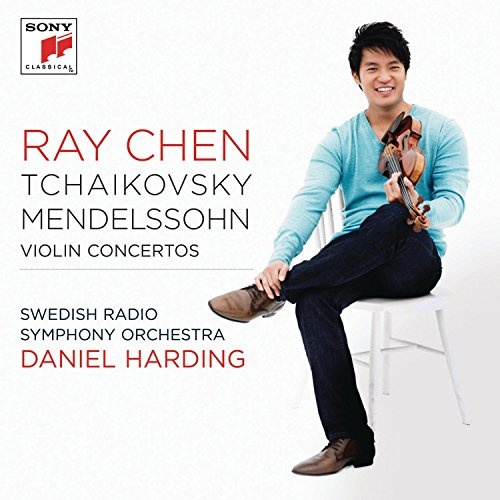 Quickly following the release of Virtuoso, his 2011 album of essential violin repertoire on Sony, Ray Chen presents a pair of famous concertos to show that he has indeed arrived as a major recording artist. Tchaikovsky's Violin Concerto in D major and Mendelssohn's Violin Concerto in E minor are the evergreens most young violinists launch careers with, and Chen won major competitions with them. He undoubtedly takes these obligatory vehicles in stride, playing with easy grace and giving them amiable interpretations. Considering that Chen's first recording for Melba Recordings was an exploration of works for violin and piano by Igor Stravinsky, and that his second album (his first outing on Sony) covered chamber pieces by Tartini, Bach, Wieniawski, and Franck, expectations for something out of the mainstream or more interesting would surely be dashed with this conventional release. But Chen's style of playing and training are well-suited to these Romantic concertos, and fans who have followed his career will recognize the value of getting these standards on disc before moving on to more interesting fare. Chen is joined by Daniel Harding and the Swedish Radio Symphony Orchestra, who provide warm support and help him bring across the feelings of gentle lyricism and genial showmanship that make this CD worth hearing.