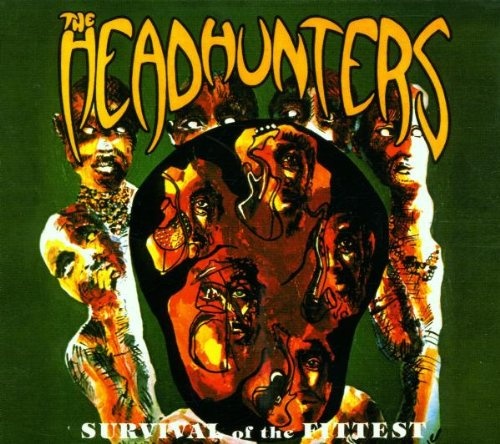 In 1975, Herbie Hancock's group the Headhunters, which brought him immense success at the time, released their first solo album. Produced by Hancock, but without his participation, the lineup features the Thrust group of Mike Clark on drums, Paul Jackson on bass, Bill Summers on percussion, and Bennie Maupin on various reeds, plus new guitarist DeWayne "Blackbird" McKnight, who toured with Hancock and performed on the Man-Child and Flood albums. They added a few guests: three further percussionists (Zak Diouf, Baba Duru Oshun and Harvey Mason Sr. -- the latter was the first Headhunters drummer) and flutist Joyce Jackson. While the thought of a Hancock-less Headhunters might puzzle some listeners, the group did extremely well without him -- in fact, Survival of the Fittest may be the ultimate space-funk album. The interplay between all musicians is tighter than tight, especially in the rhythm section of Jackson-Clark-Summers, who can effortlessly make everything groove and move. The first track, "God Make Me Funky," marks Jackson's debut as a lead vocalist -- a role he unfortunately wouldn't reprise too often. While his singing is a bit off-key, his vocals owe much to the blues tradition and carry great urgency and authenticity. At the end of the song, his voice is quite reminiscent of Ray Charles. The track starts off as a funky R&B number (the beginning bears close resemblance to their earlier "Palm Grease"), with background vocals being provided by the Pointer Sisters; it then turns into a fast chase with an intense, frantic Bennie Maupin solo which borders on the atonal. "Mugic" starts off like the funk version of "Watermelon Man," and turns out to be a showcase for Bill Summers' various percussion instruments. "Here and Now" starts aimlessly, develops into a lopey groove, and gains speed as Maupin delivers another excellent solo, accompanied by ethereal guitar sounds. "Daffy's Dance" is in a similar vein, though it's rhythmically more consistent and has a rather funny melody. "Rima" is extremely spacy -- McKnight's guitar serves as a substitute for keyboards and produces lots of freaky sounds; Joyce Jackson's echoey alto flute provides a good counterpart for Maupin's bass clarinet; Summers adds atmospheric percussion, and the groove is very subdued. The last track, "If You've Got It, You'll Get It," returns to a funk/R&B mode, featuring a catchy bass riff and a singalong chant, though this time McKnight steps into the solo spotlight. Survival of the Fittest is consistently interesting and features lots of great performances by excellent musicians -- and it never forgets to groove.