Spider-Man: Music from and Inspired By Review

From all accounts, Sam Raimi invested Spider-Man with some of his own personality -- lobbying for the great, geeky Tobey Maguire to play Peter Parker and giving the visuals a crackling energy equally reminiscent of his own work on Evil Dead and Darkman and the original Marvel comic books. That's very good, especially since studios are notoriously reluctant to let directors imprint their own signature on tent-pole pictures like this and, given the choice between having the picture or the soundtrack for Spider-Man have distinctive personality, the movie should have a personality since it is a movie, after all, and the ultimate concern. Still, it's a disappointment that the soundtrack to Spider-Man is so calculated, pitched directly at the nü-metal/rap-rock/post-grunge crowd with little regard for flair or personality. Almost none of the songs on the soundtrack are heard in the movie -- Macy Gray's "My Nutmeg Phantasy" is put to the forefront once, but most of these songs are heard either way in the background on the radio or over the closing credits. This isn't unusual for soundtracks of this nature, but sometimes the "inspired by" soundtracks have some spark, most notably with Prince's songs for Batman. Though many of the bands do try to tie into the theme of Spider-Man -- Alien Ant Farm has "Bug Bytes," Chad Kroeger of Nickelback offers the dour anthem of "Hero" -- it all winds up as something that sounds crafted for modern rock radio, not the movie, especially since it lacks both the colorful zest of the film's design or the geekiness of Peter Parker. Some songs distinguish themselves along the way -- the Hives display why they're rightly touted as an antidote to generic modern rock with "Hate to Say I Told You So," the Strokes toss in their B-side worthy "When It Started," and Pete Yorn gives listeners his gentle "Undercover" -- but on the whole, it's a pretty undistinguished affair, topped off by an awful version of the classic "Theme From Spider-Man" from Aerosmith, who treats it as serious heavy psych-rock. At least when that's finished, you can begin the disc again and hear the original theme, which sounds much livelier and is more fun -- and, after all these years, still feels appropriate for Spider-Man, even in Raimi's version (there's a reason why he put it over the end credits of the film, after all). 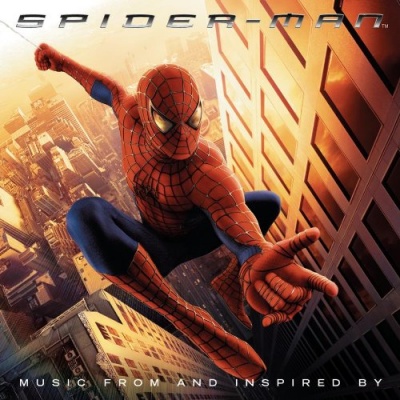 Spider-Man: Music from and Inspired By Album Information