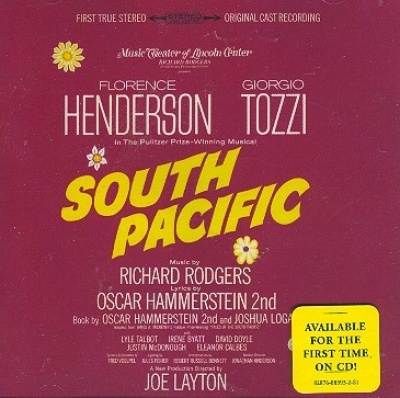 South Pacific was revived on Broadway after its initial 1949 production, but the first major revival was the one undertaken by its composer, Richard Rodgers, in 1967 as part of his stewardship of Music Theater at Lincoln Center, an organization presenting limited summer engagements of legendary musicals at the New York State Theater in the Lincoln Center for the Performing Arts complex. Rodgers re-hired Giorgio Tozzi, who had been heard but not seen in the 1958 film version, dubbing the singing voice of Rossano Brazzi in the role of Emile de Becque, the French planter who woos Ensign Nellie Forbush on an island in the South Pacific during World War II. For Nellie, Rodgers picked Florence Henderson, a minor Broadway and TV performer whose most substantial stage credit had been starring in Fanny in 1954 opposite Ezio Pinza, who, coincidentally, had been the first Emile. (Henderson was two years away from realizing her true destiny as Carole Brady on TV's The Brady Bunch.) Tozzi certainly had the voice for his part, and Henderson, even if she was no Mary Martin (the original Nellie), was appealing. The secondary roles were also filled efficiently, and Rodgers snuck some extra music in here and there on what was billed as the "first true stereo" recording of the score. That was enough to make this South Pacific at least as good as the 1958 soundtrack, but still a far second to the original Broadway cast album.