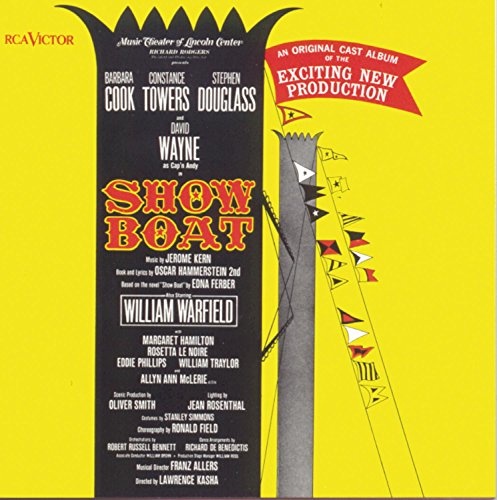 Music Theater of Lincoln Center was a summer repertory organization under the direction of Richard Rodgers that mounted revivals of Broadway musicals. In 1966, it produced a revival of Show Boat that opened July 19 and ran 64 performances before undertaking a national tour. The inspiration for the production seems to have been a 1962 studio cast recording released on Columbia that featured Broadway star Barbara Cook (best known for playing Marian the librarian in The Music Man) as Magnolia Hawks, William Warfield repeating his role as Joe from the 1951 film version, and conductor Franz Allers. All three were back in this stage revival, the warm-voiced Cook getting to sing "Make Believe," "You Are Love," and "Why Do I Love You?," all as duets with her leading man, Stephen Douglass, while Warfield, of course, sang "Ol' Man River." Other standouts included David Wayne as Magnolia's father, Captain Andy, who got to sing part of "Why Do I Love You?," and Constance Towers in the key role of Julie LaVerne, singing "Can't Help Lovin' Dat Man" and "Bill." With such an powerful cast, this Show Boat was a natural for aural preservation, and RCA Victor wisely put the cast in a recording studio shortly after the opening. There have been so many recordings of Show Boat that this can't be called the best one, but it is certainly among the better ones.