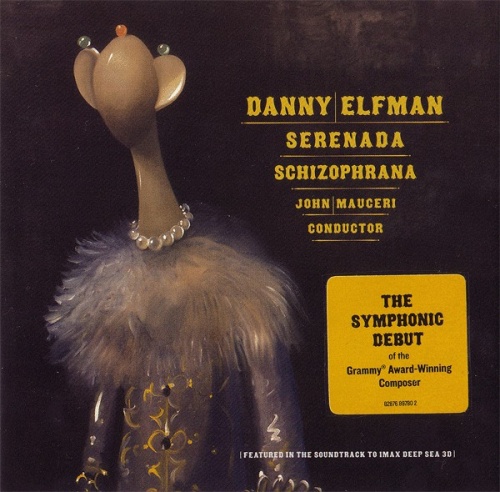 Rock-musician-turned-film-composer Danny Elfman was commissioned by the American Composers Orchestra to write Serenada Schizophrana, his first piece of classical concert music, and it had its world premiere at Carnegie Hall on February 23, 2005. This recording, produced by Elfman and conducted by John Mauceri, has been made with all the ambition of a big-budget Hollywood film, employing an orchestra of 140 members plus a small choir. In his liner notes, Elfman cites a series of influences, but the two a listener is most likely to be reminded of are Bernard Herrmann and the man Elfman calls "one of my few living influences," Philip Glass. This is because, as is usual in his many film scores, Elfman pay particular attention to radically changing dynamics (Herrmann) and quick, driving tempos (Glass). But the biggest influence on Elfman, as demonstrated here, may not so much be an earlier composer as his day job. He writes that he began composing the work by writing short pieces of "maybe a minute each," developed some of them until he had six separate movements, and then "more or less let the movements take themselves wherever they wanted to go in a kind of musical stream of consciousness...." This turns out to be a reasonable description of the musical results, and another way of putting it would be to say that Elfman as a film composer, particularly of the adventure and fantasy films on which he often works, is accustomed to writing short cues to underline specific dramatic moments onscreen and that, even without that inspiration, he has done much the same thing here. One might have hoped that he would take the opportunity to develop his musical ideas more rather than just stringing a lot of them together and juxtaposing them in ways that sound interesting, but given his experiences of the past 20 years, that might have been too much to expect. As it is, Serenada Schizophrana lives up to its name, and it is not surprising to note that, although not written for the movies, it has already been adapted to them, serving as soundtrack to the IMAX film Deep Sea 3D.