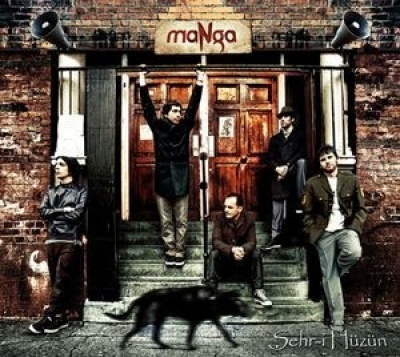 Although Manga are marketed as "that great Turkish nu metal band" (especially after their win at the 2009 European MTV awards), they are more than a Linkin Park clone. Regular local copycats simply play in a given style using lyrics in their native language, but Manga really milk the Turkish musical tradition for all it's worth -- which is plenty. Sure, they've got the stomping riffs, table scratching, and rapping down, but they use these to deliver authentic Anatolian melodies -- minor-key hooks that shift between the grim, the weepy, and the reckless dramatic abandon with each modulation in the vocalist's wavering voice, or the traditional string instruments that back the guitars on tracks like "Hayat Bu Iste." This is music rife with folk associations, evoking Ottoman love dramas as much as a modern rock club moshpit, and fit for both. Linkin Park's breakthrough was a result of their mixing the heavy riffage with goth melodies; Manga do the same thing using an entirely different melodic background which is, however, just as rich and emotive. The fact that the band is more than adept with both sides of the equation doesn't hurt, of course. Anatolian music and modern metal gel so well on Sehr-i Hüzün that anyone into any of those genres ought to hear it, if only to believe it's possible -- although this doesn't mean everyone is bound to enjoy the result. The approach adopted by Manga does have its downside: the traditional melodies, conceived in a less sophisticated, pre-ironic time, sound unabashedly sappy in the 21st century, and bring out the most histrionic tendencies of commercial nu metal, replacing the angst with deep melodrama. But still, this take on two pretty stale genres is surprisingly fresh, if kitschy in its bombastic sensibility.