"Awriiiiiight, uh ze WANGO ze TANGO! One, two, three, four!" With that shriek and bludgeoning, rudimentary tandem guitar and bass riffing, Ted Nugent launches his 1980 album Scream Dream with "Wango Tango." Sweaty Teddy ain't one for subtlety, and in addition to unleashing his six-string thunder on this wickedly catchy "song," he lets loose with a slobbering, maniacal spoken section in the middle. With a handful of exceptions, Nugent isn't a good songwriter, but he plays a mean guitar, and that's really what people want to hear. His wicked playing sounds different from most of his fellow hard rock and heavy metal axemen due to his extensive use of warm-sounding, hollow-body Gibson Byrdland guitars. "Scream Dream" is darn near as addictive as "Wango Tango." The slippery mid-tempo groove of "Hard as Nails" hints at Nugent's R&B influences, but the funky bass and throaty vocals on "Terminus Eldorado" makes them crystal clear. "Flesh & Blood" is a taut, simple rocker. Early 1950s-styled, Chuck Berry-like rock & roll is the basis for "I Gotta Move" and "Don't Cry (I'll Be Back Before You Know It Baby)," and both are sung by rhythm guitarist Charlie Huhn. Drummer/producer Cliff Davies gets to sing "Come and Get It." Scream Dream isn't a good album, but "Wango Tango" and the title track are two of the Motor City Madman's better tunes. 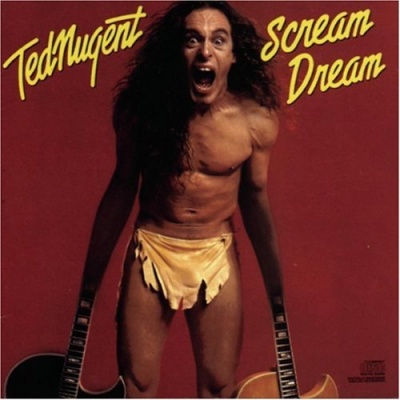