Schumann's Das Paradies und die Peri, written when he was 33, contains some immensely appealing music, so it's unfortunate it's so rarely performed or recorded. The secular Romantic oratorio is a genre that's not much in style, so it's especially nice to have such a fine performance available on this RCA SACD. Nikolaus Harnoncourt, whose use of original instruments and careful attention to appropriate period-performance practice, which he first applied to the Baroque, is steadily progressing forward to encompass middle Romantic works such as this one (and he has even moved beyond it into the twentieth century with a recording of Bartók). It may surprise listeners who are used to Harnoncourt's de-Romanticized Bach that his reading of Schumann is so sumptuously Romantic, but his approach certainly supports his reputation for a commitment to period authenticity, regardless of where it takes him. Harnoncourt's performance has a broad Romantic sweep and a nearly operatic sense of dramatic intensity and momentum. The use of original instruments is most noticeable with the brass, which sound considerably lighter than their contemporary counterparts. Sinfonieorchester und Chor des Bayerischen Rundfunks play and sing with warmth, passion, and tremendous energy. Harnoncourt has assembled a terrific team of soloists. The most prominent part is that of the Peri, sung radiantly by soprano Dorothea Röschmann. She negotiates the wide range and emotional heights and depths of the role with intense expressivity and soaring tone; she only falters in her final phrase of the work, where an exposed stratospheric sustained note veers perilously out of focus. Tenor Werner Güra has nearly as extensive a part, and he sings with beautiful phrasing and clean, bright tone. Bernarda Fink, taking the contralto rather than the mezzo-soprano role, sounds less fresh in tone than her usual stellar best, but even so, the warmth of her performance is compelling. In some luxury casting, Christian Gerhaher sings the small baritone part with stirring conviction. The sound is clean, but warm and atmospheric. Overall, this SACD makes an excellent introduction to a neglected masterpiece that contains some of the composer's most deeply felt music. 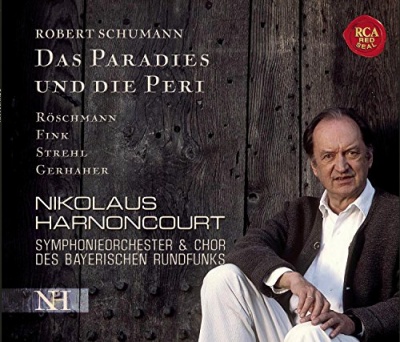