It's easy to feel a little sorry for JC Chasez, who seems fated to a perennial role as Justin Timberlake's sidekick. When both were in *NSYNC and, earlier, the New Mickey Mouse Club, they were part of a collective that divided the work equally, but Timberlake slowly pulled away from the group, dominating the Celebrity singles and press, and then he released Justified, his solo debut, in late 2002. A year later, Timberlake was a genuine superstar, not just dating movie stars but earning good critical notices, culminating in a handful of breathless raves that he was the heir to the thrones of Stevie Wonder and Michael Jackson (who apparently did not share the same throne). Heady stuff if you were Timberlake, intimidating if you were Chasez since it not only raises the bar, it suggests that the press and public are prepared to coronate Timberlake as the sole survivor of *NSYNC, the way that Beyoncé Knowles elbowed Kelly Rowland aside in the battle of Destiny's Child. To make matters worse, just weeks before Chasez launched his solo career with his debut album, Schizophrenic, Timberlake dominated American headlines due to his role in tearing off Janet Jackson's top during an infamous Super Bowl stunt gone awry. To retaliate, the NFL promptly bumped Chasez off his starring role in the halftime of the Pro Bowl, once again shoving JC into a subservient role to Justin.

Aware of this problem, Chasez is determined to outdo Timberlake at his own game, to be sexier and sleeker, to reach further and be hipper, to try something different on each track. Hence, the title Schizophrenic, which Chasez probably chose with blissful ignorance of its similarity to the name of Geri Halliwell's disastrous post-Spice Girls debut, Schizophonic. That doesn't mean JC is wrong, of course. He does change sounds and styles frequently over the album, going much further into both hard dance-club music and sappy urban-soul ballads than Timberlake, trading JT's Michael Jackson fixation for an obsession with Prince, hip producers the Neptunes for the even hipper Basement Jaxx, while delving into retro-new wave for good measure. This may not follow the Justified blueprint to a tee, but it's certainly in the same spirit -- it's a far more ambitious and diverse set of music than anything *NSYNC released, and it's often pleasing on the surface, but it's undone by the showbiz kid at the heart of it all. JC is a competent singer, but he's also an affected one, filled with mannerisms that surface whether he's crooning or growling, and he has no vocal signature as smooth or assured as Justin's slick falsetto. So, he tries harder to distinguish himself, particularly by shedding his boy background preening as a sexually charged yet sex-starved loverman. Problem is, JC is hardly convincing as a sex machine. It's partially because his voice is a little thin, partially because he resorts to schoolyard slogans like "All Day Long I Dream About Sex," but mostly because his words play like somebody who is trying to be sexy instead of simply being sexy. There's a reason why sex-obsessed singers from Prince to Diamond David Lee Roth haven't sung lines like Chasez's "'Cause when I'm all alone/I lie awake and masturbate" -- it doesn't sound like seduction, it sounds desperate, lonely, and needy. And that's just the most quotable of the dozens of weirdly worded, panting come-ons on Schizophrenic -- there's also the cheerfully banal "so much fun being naughty," the exhortation that his lover is "such a sexy dame," his desire to "sleaze you girl," and his confession that he has to "adjust the button fly on my Levis when you walk into the door," which suggests that Chasez is a sucker for clumsy dames.

If these hadn't been pushed to the forefront on over half the album, they'd be easier to forgive, but they're as incessant as his hyper-self-conscious, mannered phrasing, the work of a music-theater kid using everything at his disposal to sound street. It's telling that he sounds his best when he relaxes on the sweet ballads at the end of the album, or on the infectious sugary pop of "Something Special," since this is where he sounds comfortable. If the music on Schizophrenic was as awkward as Chavez's singing and stance, it'd be an easy album to dismiss, but what makes it so frustrating is that he has a lot of good music on the album. Whether it's the heavy dance-club throb of "Some Girls (Dance With Women)" or "Shake It," the skipping lite funk of "She Got Me," the Prince homage "100 Ways," the robotic electro pulse of "All Day Long I Dream About Sex" and "Come to Me" with its "Sunglasses at Night" sample, or the mock reggae of "Everything You Want," Schizophrenic is filled with terrific pop music, filled with undeniable hooks and a vibrant, imaginative production. Sonically, it's easy to get sucked into the grooves of nearly every song here, but inevitably, JC will do something to pull you out of a song, whether it's something he says or the way he says it. That's where Justin has him beat -- he may not have much personality on record, but he can sell the groove by not getting in its way. Chasez can't do that, at least yet, nor does he have his former bandmate's ingratiating charm, which will likely prevent him from ever reaching Timberlake's star status. But in his favor, he does have an album that on a strictly musical level tries harder and achieves more than Justified. 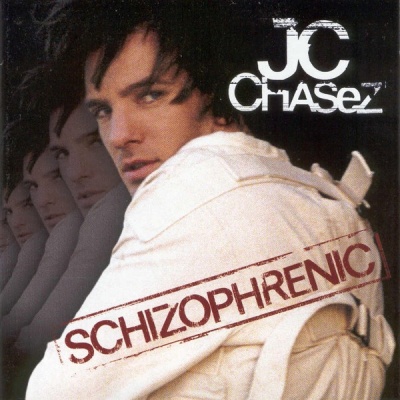