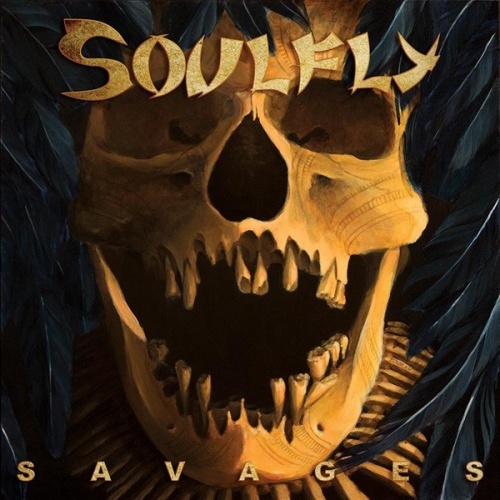 Max Cavalera has been delivering punishing, neck-snapping riffs since the 1980s, first as a founding member of influential Brazilian thrash legends Sepultura, and later as the ringleader for the more cerebral, yet similarly punitive Soulfly. Savages, the band's ninth studio album, and first to feature Cavalera's son Zyon on skins (former Borknager drummer David Kinkade left after 2012's excellent Enslaved) continues in that tradition, offering up a visceral mix of thrash, groove, death, and straight-up doom metal that begins with an air raid siren and ends in screaming feedback. It’s a fitting set of bookends for a collection of songs that Cavalera describes as being "about the human condition right now," adding "we have the Internet and we’re working on missions to Mars, but we are still decapitating each other and blowing up marathons." Savages is pure, hawkish malevolence through and through, with highlights arriving via the epic, beefy, and turgid "Ayatollah of Rock 'N' Rolla" and the relentless "Master of Savagery," one of two cuts, along with "This Is Violence," that are built upon feral drop-D riffs that you can actually feel in the back of your head, and early album gems "Bloodshed" and "Fallen," both of which are closer in tone to industrial-punk provocateurs Killing Joke and Ministry than they are to more traditional metal units like Pantera or post-And Justice for All-era Metallica. Savages is meant to be taken as both a warning and a rebel yell, and Cavalera and company connect on both levels, offering up an audio invoice for our past transgressions and a shot of adrenaline for the war ahead.