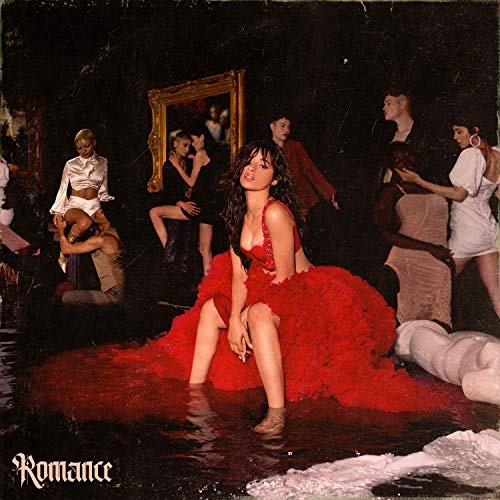 Is there a name for the opposite of a break-up album? Because that's what Camila Cabello's sophomore effort Romance feels like: a record as bursting with ecstatic emotion and erotic desire as the exuberant delirium of having just fallen in love. It's a palpable vibe she put on display during her blush-inducing performance of the single "Señorita" with her duet partner (and rumored boyfriend) Shawn Mendes at the 2019 American Music Awards. The performance ended with Cabello and Mendes teasing a kiss, a bold move that left the audience excited for what the rest of Romance would hold. What Cabello does reveal on Romance is an artist continuing to refine her distinctive pop persona as she happens to be deep in the sway of love. Working with a respectable cadre of songwriters and producers including Andrew Watt, Finneas O'Connell, Justin Tranter, and others, Cabello digs deeper into her Cuban heritage with songs like the aforementioned "Señorita," the horn-accented "Liar," and the yearning "Used to This," that display her growing sense of maturity, balancing pop, reggae, and R&B flourishes with even more Latin embellishments. If 2018's Camila was about striking out on her own after leaving her former group Fifth Harmony, then Romance is about Cabello defining herself in the pop landscape and setting herself apart from contemporaries like Ariana Grande, Dua Lipa, and Taylor Swift. There is one break-up song on the album in "Should've Said It," a defiantly steamy anthem in which Cabello reclaims her independence from a former flame against the backdrop of a Santana-esque guitar hook. She strikes an equally swaggering, rock-inflected stance elsewhere, leaning into her throaty, scritch-scratch vocals on "Shameless" and showcasing her knack for soaring falsetto balladry on "Living Proof." Along with catchy hooks, what makes Romance particularly compelling is Cabello's candor and willingness to share her experiences and emotions in striking detail. On "Easy" she sings, "I never like my crooked teeth/You tell me they're your favorite thing/Anything else?/The stretch marks all around my thighs/Kiss 'em 'till I change my mind about everything else." If Romance is an album about Cabello feeling loved and seen by someone else, it's just as much about her seeing and understanding herself as an artist.