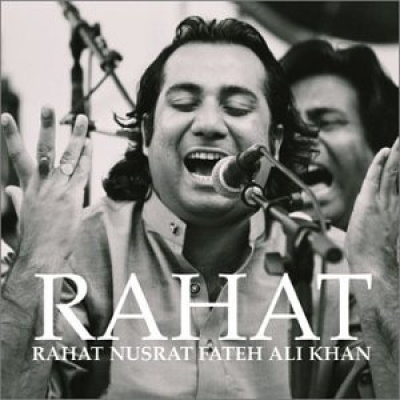 Qawwali, the driving devotional music of Pakistani and Indian Sufism, grew out of an infusion of North Indian music with Central Asian and Persian texts some 700 years ago. Slamming hand percussion, staccato hand clapping, bellowing hand-pumped keyboard harmoniums, and the atmospheric vocals of qawwali lead vocalists are among the characteristic sounds of this robust religious genre. Qawwali's intended effect is the elevating of listener and performer alike into mystical realms of spiritual and ecstatic enlightenment. Perhaps the greatest qawwali singer ever was Ustad Nusrat Fateh Ali Khan. He charmed throngs of fans around the globe with his Herculean vocals. Following his death in 1997, the responsibility of carrying his qawwali legacy forward was passed onto nephew Rahat Fateh Ali Khan. In fulfilling the wishes of his dearly departed superstar uncle, Rahat Fateh Ali Khan become the head of Ustad Nusrat Fateh Ali Khan's band and adopted his first name in a traditional gesture of respect. Thanks to the many years of expert training he received from his uncle, Rahat Fateh Ali Khan projects his voice with power, precision, and dexterity. With his debut U.S. release on the American Recording Company, Rahat Nusrat Fateh Ali Khan presents this vocal mastery and emotive power in the form of four rapturous songs. From shrill clarion pitches and soothing low tones, to notes of panoramic length and intricately reticulated rhythmic recitations, Rahat Nusrat Fateh Ali Khan's singing is every bit as imaginative as it is traditional. An extraordinary ensemble, consisting of a phenomenal chorus, thumping tabla players, and brilliant harmonium players, all come together and backup Ustad Nusrat Fateh Ali Khan's celestial vocals. From the rapidly descending tabla roll that kicks off the CD, to Rahat's soaring vocals on the last track, this release is ecstatic through and through. First-rate production techniques, compliments of American exec and Def Jam founder Rick Rubin, boosts Rahat's already potent sound by mixing the tabla way up in front. An incredibly resonant CD that sways between peaceful passages and climatic cadences, this Rahat Nusrat Fateh Ali Khan release should enrapture music lovers of all kinds. No matter what your background may be, Rahat's robust incantations may just catch you off guard, propelling you into a realm of spiritual discovery.