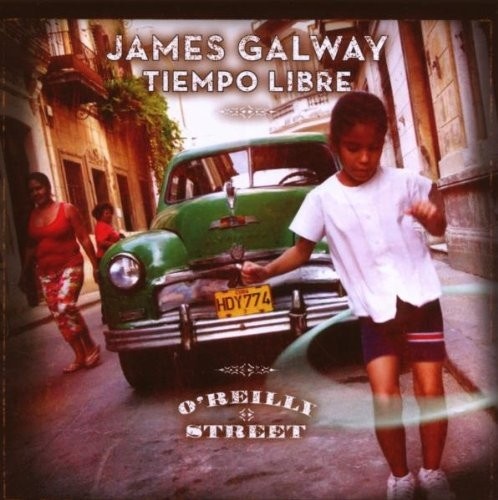 Even after the booklet presents some rather laborious connections and comparisons between Ireland and Cuba (O'Reilly Street or Calle O'Reilly in Havana commemorates an Irish general who liberated Cuba from British occupation during the Seven Years' War), you may be skeptical of this collaboration between James Galway and the Cuban-trained, Miami-based Afro-Cuban ensemble Tiempo Libre. If so, however, you would be mistaken in your skepticism. Galway and Tiempo Libre have delivered a genuinely fresh experiment in crossover collaboration. The program is ingeniously put together. The opening selections are drawn from Claude Bolling's two suites for flute and jazz piano. Movements from each suite are used, and even beyond that Galway treats the music freely, introducing octave transpositions and new transitions. The aim is to carve out a space for the musicians of Tiempo Libre, whose percussionist Leandro González supports Bolling's flute lines with an offbeat layer and then ramps up the polyrhythms together with bandleader and pianist Jorge Gómez in more heavily Cuban interludes. The music succeeds precisely because the musicians don't try to merge structures that are fundamentally different; the weave is loose. In the second half of the disc, the balance shifts with Gómez's original compositions. Here, generally speaking, you hear Cuban rhythms at the beginning, with Galway's more melodic lines in response. The delightful conclusion, the Badinerie from Bach's Suite for orchestra in B minor, BWV 1067, works the same way, and your ears have been retuned to a point where Bach's arpeggios, brought in by Galway in the B section, actually feel like they're pulling against the basic Cuban framework laid down at the beginning. In the full ensemble sections, Galway handles the Cuban rhythms with aplomb, and in general he sounds brisker than he has in quite awhile. The three-way style fusion of classical, jazz, and Afro-Cuban percussion could easily have been gimmicky, but Galway and Tiempo Libre work it out carefully and intelligently in this lively and enjoyable crossover release.