Occasional Rain, originally released in 1972, is the first of three albums, Chicago singer/songwriter Terry Callier cut for Cadet in the 1970s with producer Charles Stepney. Eight years earlier Callier, then a soulful blues and folk singer, cut an album of covers (as was par for the course in 1964 at the end of the folk revival, Bob Dylan was just getting his momentum) for Prestige, but it was shelved until 1968 and went nowhere. Callier spent the intervening time touring coffeehouses and small clubs around the country until he signed with Cadet. While the voice is most certainly the same, the nearly alchemical transformation of his sound via his own songwriting -- and the way those songs were treated by Stepney -- is still mind-boggling. Occasional Rain is recorded as a suite; not quite a concept album, there are segues, all titled "Go Head On," fading in and out that introduce various stages in the recording. Stepney put together a band led by Callier's excellent acoustic guitar playing, his own harpsichord and organ, pianist Leonard Pirani, bassist Sydney Simms, and drummer Bob Crowder -- it's the leanest production job in their collaboration. The beautiful touch, though, is Stepney adding a backing chorus with sopranos Minnie Riperton and Kitty Haywood, and contralto Shirley Wahls! The nearly baroque soul sound is heard almost immediately on the classic "Ordinary Joe." The organ and harpsichord momentarily offer the false impression of horns in a pulsing 4/4 before Callier lays out the poetic truth of his protagonist: "For my openin' line/I might try to indicate my state of mind/Or turn you on-or tell you that I'm laughin'/Just to keep from cryin'...Now I've seen a sparrow get high/And waste his time in the sky/He thinks it's easy to fly/he's just a little bit freer than me..." The jumbled images are met with the swell of a taut, killer band; they give him more room out there on the ledge to let his freely associated snapshots articulate into a whole that expresses a transition from heartbreak to resistance to determination, to a holistic spirituality and ultimately to hope as he transfers it from his own view to the woman he is addressing. Whew. These cats could have recorded for Buddah backing the Lemon Pipers, but Stepney keeps it from any saccharine sweetness, and makes it all flow into the direct expression of deep emotion.

"Golden Circle" follows, with that choir in the backdrop flowing in and out of a very scaled back mix where acoustic piano and Callier's acoustic guitar lead the flow of this deep expression of love as vulnerability. The grain in Callier's voice is very masculine, but its tenderness is total, his words poetic; sophisticated yet very direct. The added cello on "Trance on Sedgwick Street," by Earl Madison, makes for the startling juxtaposition of hard, street-tough truth and a critical examination of spirituality. Callier's guitar and that multi-tracked cello are devastatingly effective. The folk and blues roots in Callier's writing and singing just pour from this tune, but Stepney understands that these are soul tunes, so he creates bridges from one tradition to the next, making it a seamless whole.

The other classic tune from this session is the title cut. This beautiful and startling psychedelic soul tune is unlike anything else in Callier's catalog. Stepney adds multi-channel sound effects, tiny little organ tones that float through each channel beginning at the end of certain lines seemingly randomly. As an acoustic guitar plays atop a church organ which swells in the middle eight to fill out a shelf underneath Callier's voice, it feels like an entire universe floating between one channel and the next (especially on headphones!). It can even be startling, as those sounds, even though they are expected, are kind of a shock -- you'll need to listen through it a couple of times to get the full meaning of the Callier's gorgeous songwriting. In reference to the "Go Ahead On": they are the only direct reference to the blues roots in the songwriter's past and are very effective at both establishing that musical continuum and highlighting this wonderful new direction. This record is tight in a way the other Callier titles are sprawling. Here he holds the songs in check, and Stepney supports that while expanding the sonic palette that frames them. Certainly "Blues for Marcus," touches on those blues roots, to be sure, but the cellos and the decorative acoustic guitar turn it into a soul tune. That's what happens in the hands of two masters who know how to work together. Callier probably had no idea he was so inspired until he and Stepney began to tease the genius out of the songs on tape and illustrate them in such an organic yet wildly expansive way. The final cut "Lean on Me" (not to be confused with the Bill Withers tune of the same name) sends the set out on the highest of high notes: Callier's voice is so firm and determined, but his gentleness is not to be underestimated. The empathic dedication in his singing -- and its encouragement by that chorus of women makes the track -- and the album -- transcendent. 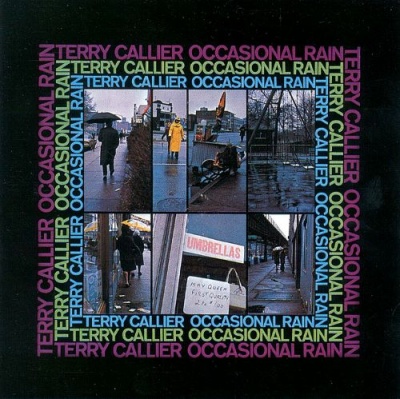