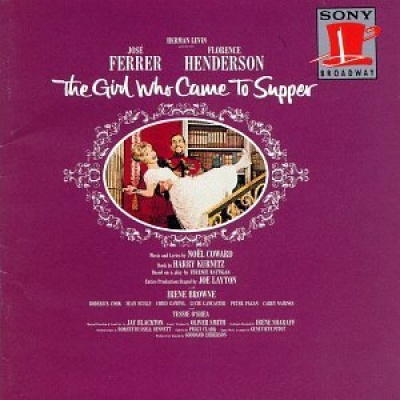 Based on Terence Rattigan's 1953 play The Sleeping Prince (which also was the source for the 1957 film The Prince and the Showgirl, starring Laurence Olivier and Marilyn Monroe), The Girl Who Came to Supper is set in London in 1911, but the major characters are the Prince Regent of Carpathia, who is in town for the coronation of King George V, and an American chorus girl with whom he becomes involved. The story of an older aristocratic man and a younger female commoner is reminiscent of My Fair Lady, the previous success for the show's producer, Herman Levin, and there are other echoes of that musical in Noël Coward's score, including the seemingly irrelevant medley of Cockney songs that features Tessie O'Shea and runs nearly 11 minutes. (It's sort of like "Wouldn't It Be Loverly," "With a Little Bit of Luck," and "Get Me to the Church on Time" all mixed together.) José Ferrer, as the Prince Regent, sings to a diplomat of his dispassionate sense of how women should behave in "Curt, Clear and Concise," much as Henry Higgins sang "A Hymn to Him" to Colonel Pickering in My Fair Lady. "Coronation Chorale," the second-act opener, is similar to "Ascot Gavotte." And Ferrer's final wistful song, "I'll Remember Her," is this show's "I've Grown Accustomed to Her Face." Not much like Eliza Doolittle, however, is Florence Henderson's chorus girl, Mary Morgan. She's too lively for that, particularly in her love song "Here and Now" and in her own lengthy second-act showpiece, the eight-minute "The Coconut Girl," in which she explains the plot of the show she's in and sings all the songs. There is some typical Coward wit in the lyrics, and O'Shea and Henderson turn in strong performances, even if The Girl Who Came to Supper is not the most original Broadway musical ever written. When this album was released in December 1963, the sequence of songs differed from the order in which the songs were performed in the show, probably for technical reasons having to do with how the LP tracked. For the 1992 reissue on CD and cassette, the sequence was altered to conform to the on-stage running order.