My Own Lane Review

Mixing the hazy, lazy feeling of cloud rap with a sound that's slick and entirely prepared to be the 2014 definition of radio-friendly, L.A.-based Kid Ink isn't necessarily in My Own Lane because of his patched-together style, but the talented, Drake-sounding rapper is certainly unique when it comes to cocky career development. Consider his feature-less, 2012 indie album Up & Away his proper introduction and showcase, because this major-label debut jams the features in, so much so that R&B star Chris Brown gets two turns, "Show Me" and "Main Chick," both of them light, airy, and attractive tracks from producer Dijon "DJ Mustard" McFarlane, and both of them sounding like a screwed 'n' chopped take on Robin S' dancefloor classic "Show Me Love." MGK and Elle Varner show up to make the already worthy emo-rap power ballad "No Miracles" an even better challenger for B.o.B's "Airplanes," and when Tyga comes round for a lusty and clever swagger number ("She's so innocent, I'm a guilty trip") pop-rap tracks aimed at the strip club get a new standard bearer with the title "Iz U Down." Still, it's all the kind of light-hearted stuff "true" hip-hop heads shake their fist at till Pusha-T and producer Sham "Sak Pase" Joseph offer Kid Ink something off-kilter and hard during the great "Murda." When it comes to outros, "More Than a King" is an inspired, free-form way to close the show, filled with anticipation-building stops and starts along with impossible boasts such as "I feel there ain't been no man like me since Adam." Add to this a traditional intro like "Hello World" and this debut has plenty of the elements of a grand entrance, but Ink's version of show and prove is so cool here it could be taken as snotty, and the tricky "Murda" has a lot of work to do as the flighty album's lone anchor. Approach this release as album number two and it comes off as a celebration based on past success, so use Up & Away as an intro, then join Ink and all the inspired party people he invited to My Own Lane. 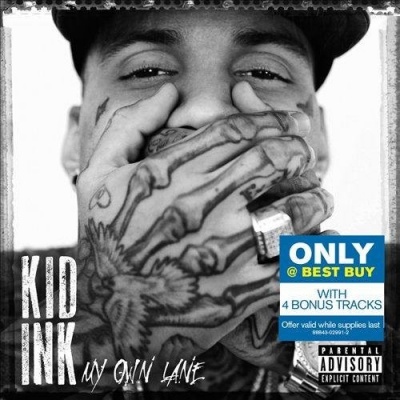 My Own Lane Album Information