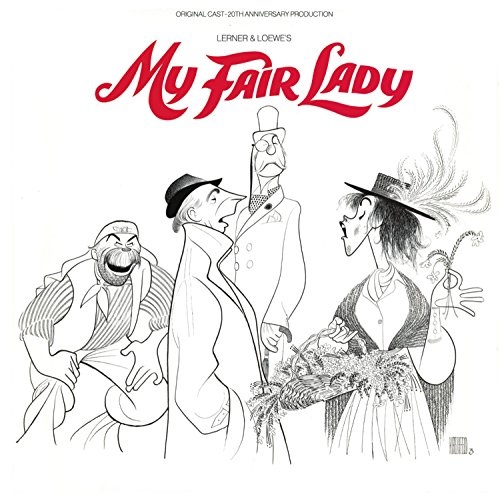 The first major Broadway revival of My Fair Lady was billed as the 20th anniversary production and, in fact, opened 20 years to the month after the first one in March 1976. Lyricist/librettist Alan Jay Lerner and composer Frederick Loewe joined theatrical producer Herman Levin in supervising the new staging in a style as close to the original as possible, and the cast album was produced by Goddard Lieberson, just as the 1956 one had been. Julie Andrews was by then too old to play Eliza Doolittle, and Rex Harrison apparently was unavailable to be Professor Henry Higgins (he would return to Broadway in a 25th anniversary production), so the principals this time around were Christine Andreas and Ian Richardson. The sole cast holdover after 20 years was Robert Coote, back in the minor role of Colonel Pickering. Lieberson had a bit more time to include on the album, and he used it to add the instrumental "Embassy Waltz," an extra verse of "Get Me to the Church on Time," and the show's closing bit of dialogue between Richardson and Andreas. Otherwise, the score was very similar to what it always had been. The effect, aurally, was not unlike what it might have been like for a theatergoer of the late '50s who showed up well into the run of the original production to find that most of the original stars had been replaced by competent, professional actors attempting to replicate the performances. Richardson rolled his "R"'s more than Harrison, and Andreas lacked Andrews' humor, but their recitals were perfectly acceptable -- as substitutes, that is. In fact, no one in the cast bettered the original performers, not George Rose as Alfred P. Doolittle, nor Jerry Lanning as Freddy Eynsford-Hill, capable as they were. It's no wonder that this cast album went out of print and stayed out of print until 30 years later, when Sony BMG Entertainment's Masterworks Broadway imprint finally got around to reissuing it on CD in 2006, by which time it was a curiosity of a nearly forgotten staging of a landmark show.