As major labels strained for more and more excuses to dump vault tracks into reissue compilations in the early 21st century, some of the anthology themes that were cooked up were pretty silly. Such was the case with Mullets Rock!, the common denominator being the hard rock of the 1970s and early '80s that those sporting the infamous mullet haircut were most likely to groove to. If you're going to go with the concept, you might as well go the whole way, and it must be admitted that this 35-track, two-CD set does a pretty thorough job. With all but one of the cuts falling between the years 1970 and 1984, this is something of a mini-textbook of the most popular bombastic hard rock songs you're likely to come across on AOR radio. Core classics of the genre such as Deep Purple's "Smoke on the Water," Mountain's "Mississippi Queen," the Edgar Winter Group's "Frankenstein," Kansas' "Carry on Wayward Son," Grand Funk Railroad's "We're an American Band," Bachman-Turner Overdrive's "Takin' Care of Business," Meat Loaf's "Bat Out of Hell," Ram Jam's "Black Betty," Rick Derringer's "Rock & Roll, Hoochie Koo," and Argent's "Hold Your Head Up" are all here. Some of the selections skirt pop, like the Hollies' "Long Cool Woman (In a Black Dress)," Toto's "Hold the Line," Cheap Trick's "Surrender," Brownsville Station's "Smokin' in the Boys Room," Alice Cooper's "School's Out," and Eddie Money's "Two Tickets to Paradise." And there's a good helping of cuts by acts routinely derided by critics, such as REO Speedwagon, Loverboy, Journey, Molly Hatchet, and Ted Nugent. It's easy to imagine the mullet crowd playing nothing but these two discs in their cars or trucks for weeks on end, and the package most likely will pick up a lot of other mainstream hard rock fans as well. There aren't any liner notes bar a few exhortatory words by Barney Hoskyns (co-author of The Mullet: Hairstyle of the Gods), though it could be argued that detailed annotation isn't a priority for much of the audience for a reissue such as this. 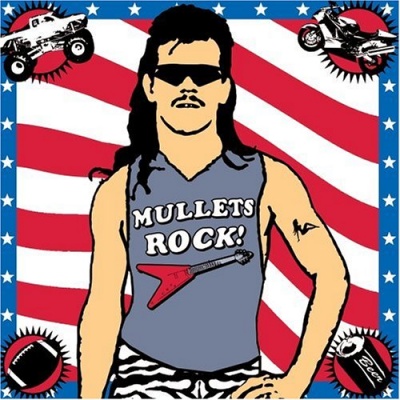