A technically adroit pianist with an ear for sensitive, emotive accompaniment, Billy Childs has built a career primarily around backing other artists, including trumpeter Freddie Hubbard, vocalist Dianne Reeves, and trumpeter Chris Botti. Although he's recorded a number of superb solo dates, on 2014's Map to the Treasure: Reimagining Laura Nyro, Childs once again sets himself just outside of the spotlight as he gathers various musical friends to pay homage to his longtime idol, the late singer/songwriter Laura Nyro. Having discovered Nyro's emotive and lyrically thoughtful genre-crossing folk recordings in his teens while studying jazz and classical music at the University of Southern California's Community School for the Performing Arts, Childs would eventually get to work with Nyro prior to her death from ovarian cancer in 1997. One gets the sense that in an ideal world, Childs might have recorded this album with Nyro herself as a kind of retrospective anthology. In lieu of that poignant fantasy, here Childs, along with producer and former USC Community Schools classmate Larry Klein, have reinterpreted a handful of Nyro's songs, taking an ambitious, cross-genre approach that balances the intimate folk of her original recordings with a layered jazz and symphonic pop sound. Along with the aforementioned Reeves and Botti, Childs is joined by such like-minded luminaries as vocalist Renee Fleming, cellist Yo-Yo Ma, singer/songwriter Rickie Lee Jones, bassist/vocalist Esperanza Spalding, saxophonist Wayne Shorter, and others. Ultimately, with Map to the Treasure, Childs doesn't simply reimagine Nyro's songs as elevate them in a spiritual and heartfelt celebration of her life and music. 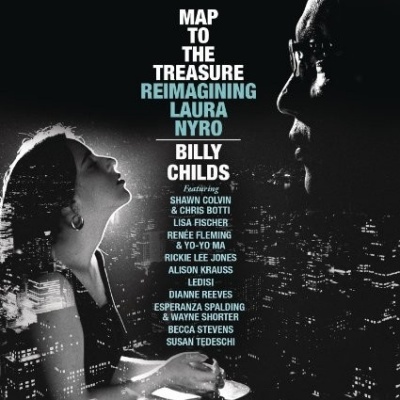