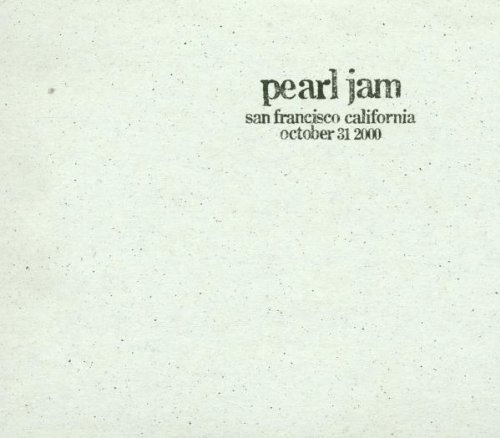 It's Halloween night 2000 and there is one week and five shows left in Pearl Jam's tour. By this time, the band seems to be on autopilot. They seem content just to give the casual fan what he or she wants. For the third night in a row, the band plays no songs from their most adventurous album, No Code. Still, they try to get the energy going for the occasion. A total of six songs from the band's classic debut, Ten, are played, which is a yearlong high. Among these is the choice of "Release" as the opening song, which is always a plus. Other older crowd-pleasers such as "State of Love and Trust" are also played early on. Eddie Vedder adds a classical guitar "Romanza" intro to the staple "Better Man," as well as the English Beat's "Save It For Later" tag at the end. The main set ends with a better-than-average version of "Porch" with improvised lyrics in the extended bridge section. Still, this seems like a very standard business-as-usual set. Vedder inevitably includes a lot of rhetoric about the upcoming presidential election, even inviting two fans dressed as George W. Bush and Al Gore up on-stage during the encore to dance during the politically charged "Do the Evolution." The band tries to enliven the encore with three cover songs in succession, including "Crazy Mary" by Victoria Williams, the oldie "Soldier of Love" by Arthur Alexander, and the Who's "The Kids Are Alright." (A second Who cover, "Baba O'Riley," concludes the concert.) The band returns for the final encore dressed as the Village People. As a result, the last two songs of the night are very sloppy with all the laughter and mischief among the bandmembers. It's too bad that there are no pictures of these costumes included with the CD, although they can be seen both online and on the tour DVD. Overall, the Halloween night concert is good and a lot of fun, but not spectacular or essential.