A listen to Pearl Jam's October 25, 2000, concert in San Diego makes one suspect that it was marked by the band as one of their favorites in the series of 72 live releases only because both singer Eddie Vedder and drummer Matt Cameron used to live there. It is by no means a great performance -- only adequate. Vedder has a terrible night remembering lyrics, and he is struggling with a cold during this week of the tour. His head seems to be elsewhere. Also, the show has an oddball set list, as several prominent songs are left out. The monster hit "Better Man" is not played for the only time in the 47 North American concerts in favor of songs that showcase the hometown boy, Cameron, either instrumentally or vocally, like "Immortality" and "Pilate." This concert is most valuable for the insights it provides into Vedder's inspirations and psyche. Midway through the main set, two songs about violence are played back-to-back: "Rival," from the 2000 album Binaural, and the classic "Jeremy" from 1991's Ten. Between the two songs, Vedder comments that "Rival" should be subtitled "Growing up Gay in Littleton," referring to the Colorado town where the 1999 Columbine High School massacre took place. Then, talking about "Jeremy," he says the song is pre-Columbine, and is based on both an incident he witnessed growing up in California and a story he read in the newspaper, but the media linked it to Columbine. Later, Vedder's ukulele feature "Soon Forget," usually played only as an encore, is played in the main set, "since this is the closest we'll get to Hawaii on this tour." The odd placement of the song in the set creates the false sense of an intermission in the show, as the band clears off the stage to leave Vedder alone in the spotlight. Then later on, when the band returns for the real encore, he tells the crowd a story about how he had been talking to a friend about what a rough year it had been. (The band had nine fans crushed to death during their June 30, 2000, show at the Roskilde Festival in Denmark.) Vedder said he had been experiencing deep depression, and he was going to play a song he had used as a tool to deal with it. This leads to a live premiere by the band, a cover of "Don't Be Shy" by Cat Stevens, a song about speaking up and expressing one's feelings, performed by Vedder solo. That was the defining moment of this flawed but psychologically revealing performance, which is absolutely essential for serious Pearl Jam collectors, or for anyone curious about the band's state of mind near the end of a hard year of touring. 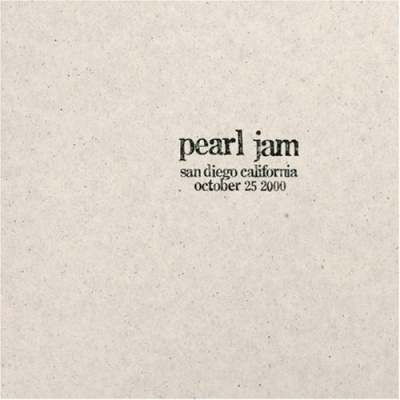