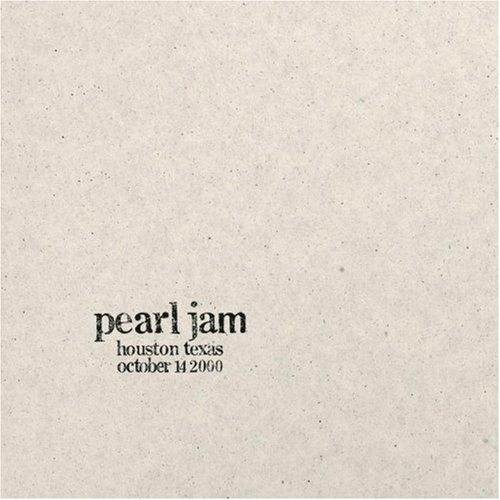 After a string of great concerts in the heartland of America, Pearl Jam moved south to Texas for four shows, starting with two consecutive nights in Houston. This first night in Houston is good, but not as spectacular as recent concerts in cities like Chicago and St. Louis. For one thing, the sound quality of the recording is not as clean and crisp as usual. Matt Cameron's drums are especially affected. The drum sound is a pillow-like thud, and it is pushed to the back of the mix. Also, the band falls into the trap of organizing the show into blocks of either old favorites or newer, lesser-known material instead of mixing them together. This type of planning creates a lull in some parts of the concert, which makes listening a chore at times. The most obvious example is when the band couples the obscure songs "Evacuation" (from the 2000 album Binaural) and "Mankind" (from 1996's No Code). The band plays "Mankind" infrequently, because guitarist Stone Gossard sings lead vocals and he is awkward singing lead. This version is especially bad, because Mike McCready fouls up the opening chords so badly that they have to start again. Even when they get it going, they still have problems with the changes. However, the band rebounds with three classic songs from the Ten album to close the main set, "Jeremy," "Black," and "Porch." Eddie Vedder sings the first chorus of "Jeremy" in the original style for a change, while "Porch" again features a set of improvised vocals in the middle section. During the encore, Vedder could not resist singing a humorous improv about a Houston native -- then presidential candidate George W. Bush -- sung from the perspective of the first President Bush. During the final encore, Vedder attempts his ukulele-only song, "Soon Forget." This song is often stopped for some reason, and this version is no exception. This time, he blames a technical problem with the instrument (possibly a broken string), stopping and exclaiming, "It broke!," before going on and finishing the song. In all, the first night in Houston is a good but inconsistent outing by the band, not quite among the best of the tour.