At age 15, Neal Schon landed job offers from both Carlos Santana and Eric Clapton -- in the same week! Schon would eventually join Santana where he would meet keyboardist Gregg Rolie. After a short stint with Santana, Schon and Rolie would leave to form the super successful Journey. Despite Journey's ascension to the pinnacle of the rock world, Schon was often criticized for failing to live up to his advanced billing. The adulation of rock luminaries such as Carlos Santana and Eric Clapton left no room for anything but the Second Coming. Million's of fans saw it differently. Journey would eventually become the largest selling act in Columbia Records history; and, a 1983 Gallup Poll named Journey America's favorite band. Even in Journey, though, Schon's contributions were often eclipsed by the unique voice of Steve Perry. It would take him the better part of two decades, and the 1989 release of Late Nite, before he would finally take center stage. Late Nite represents a fully articulated vision of the Schon signature. From the opening of the title track to "Inner Circles," Schon, and keyboardist/composer Bob Marlette (Al Stewart, John Wetton, Tracy Chapman, et al.), create a soundscape of passion that is at once melodic, epic, and moving. In fact, there are few, if any, recordings that deliver as potent an emotional experience. In essence, Late Nite is a study in anthemic expression that can implant itself in the imagination of the listener. The majestic "Steps" is a perfect example of how the duo has encapsulated melodic electricity into a four-minute archetype of breathtaking beauty. Most of the album lingers in the psyche long after you've turned it off. What could easily have been an exercise in excess, Schon and Marlette serve up with good taste. Moreover, all of the tracks grab the listener with sharp, engaging, melodies. The arrangements provide the perfect launching pad for Schon's soaring guitar solos. A mix of instrumental and vocal tracks, Schon show's he is equally adept in both areas. No, he was not blessed with a Steve Perry voice, though his has pleasing qualities, and he is more than up to the challenge. Strong backups throughout Late Nite, which are at times soulful as on the charged "Rain's Comin' Down," also help to enhance the angelic quality of the tracks. Schon would later reinvent his guitar signature on the beautiful Beyond the Thunder. He would then shift gears again for Electric World, evolving yet another hybrid. Not a commercial success when it was released, Late Nite remains a thoroughly engrossing and at times, beautiful work. 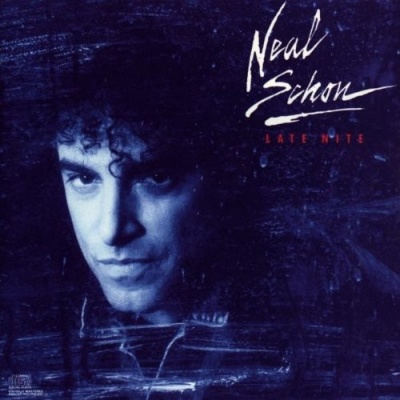