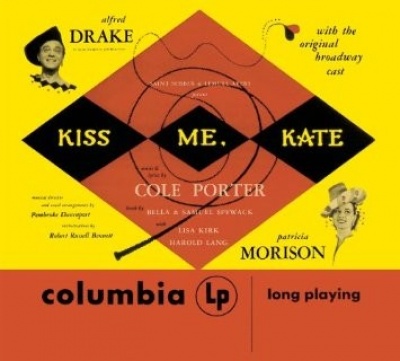 No less an authority than Frank Sinatra considered Cole Porter one of the greatest songwriters of all time, and he generally remembered more as a composer of songs than a composer of musicals. That is, most folks can remember Porter's songs instantly, but couldn't for the life of them remember where they came from. This is less true of the songs from Kiss Me, Kate because not only are the songs memorable -- who could forget "So in Love," "Too Darn Hot," and "Brush Up Your Shakespeare"? -- but so is the musical The Taming of the Shrew, infused with a distinctly modern sensibility. It is, in fact, as Porter put it, "Wunderbar" that Sony has released a remastered version of the musical's original cast recording with Alfred Drake and Patricia Morison in the leads, in performances that are essentially definitive. Drake's "I've Come to Wive it Wealthily in Padua" and Morison's "I Hate Men," are unsurpassed for self-conscious humor, and their duets together are unequalled for passion and irony, which is not an easy combination to pull off. In this 2009 release, the mastering is clearer and more vivid than that of the first issue of the CD, but the sonic improvement may not be enough to make those who already have the original CD spring for this new version.