Journey to the New World Review

The very early history of the folk music revival in America is peopled to some extent by classical musicians such as Ruth Crawford Seeger (Pete's stepmom) and Suzanne Bloch who acted as midwives, expert collectors of past folk material, sources of repertoire, and even as performers when there was no folk movement as such. Once the folk revival got going, however, the movement necessarily took its own direction, reaching out to the young, with some artists pursuing a distinct political agenda and all getting as far away from "art music" as they could. Although Peter, Paul & Mary have long moved out of the coffee houses and into the concert halls, the estrangement of American folk music -- as it was practiced in the 1950s and '60s -- and art music has more or less continued since; however, in her Sony Classical disc Journey to the New World, classical guitarist Sharon Isbin brings it all back together in a very beautiful way.

The centerpiece of Journey to the New World is the Joan Baez Suite, Op. 144, by late composer and critic John Duarte, and it was one of the last things Duarte completed and written specially for Isbin. It is a remarkable suite, which doesn't specifically focus on Baez so much as the musical world she represents, though she did at one time or another sing all of the songs Duarte uses as a springboard for his interpretive restatements of them. Particularly striking is "Where Have All the Flowers Gone?" as a slight taste of bitterness creeps in behind Pete Seeger's sad and sweet melody, further interrupted by "Taps"; perhaps a meditation on the idea that, though the song captivated many, its lesson was not learnt. The other long work features Isbin and violinist Mark O'Connor in duo mode on O'Connor's Strings & Threads Suite, previously heard in its violin and string orchestra garb on O'Connor's Sony release The American Seasons. It is as dazzling and unserious as Duarte's suite is reflective and knowing, and these two works provide both food for thought and the need for sheer enjoyment.

Baez herself joins Isbin on two short cuts; while she shares with Isbin the lot of being regarded as an expert interpretive artist, these performances are heartfelt and personal. Baez is one of those institutions in American music of whom the "institution" part is seldom acknowledged; it is nice to see her receive her due here. Moreover, one would not want to miss out on Andrew York's lovely early composition Andecy, written by him while "limiting my harmonies in composition to this framework, but striving for strong emotional content within it." Perhaps this helps answer something about the gulf between folk music -- which has fed classical music for centuries -- at least in America, and classical; classical musicians find pure simplicity somewhat limiting, whereas folk musicians don't necessarily care for business that impedes communication and the vaunted historic baggage of the classics. Leave it to an extraordinary musician like Sharon Isbin to tie such disconsolate threads together into something like Sony's Journey to the New World, definitely a keeper and a disc to return to again and again. 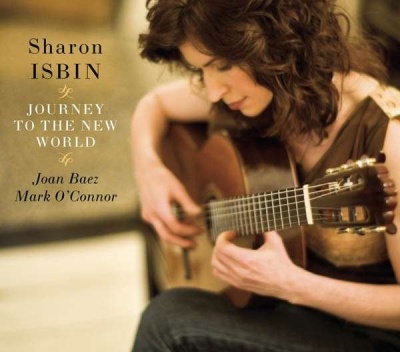