In the Night Time Review

This mid-line disc consists of half the material available on the definitive Strangeloves compilation, 1995's I Want Candy: The Best of the Strangeloves. However, parties looking for a concise package should note 2003's In the Night Time, which offers the Top 40 entries "Cara-Lin," "I Want Candy," and "Night Time" in addition to sides from their sole 1965 long-player and several single-only tracks from 1966 and 1967. In a practically Spinal Tap-ian mythology, they were promoted as (get this) wealthy Australian sheepherders whose infatuation with rock & roll had driven them to abandon their flocks and set out to create the sounds they loved. In typical American-made hype and true to form, the public decided to scream now and ask questions later. The reality of the Strangeloves is nowhere near as alluring. Bob Feldman, Jerry Goldstein, and Richard Gottehrer were actually writers/producers and Brill Building associates responsible for -- among other things -- a majority of the Angels' hits, "My Boyfriend's Back" among them. Feldman and Goldstein's relationship dated to their days as Brooklyn teens. After cutting the theme to Alan Freed's daily TV program The Big Beat, they began submitting demos under the moniker of "Bob & Jerry." They hooked up with Gottehrer in 1960 and, impressed with his writing style, asked him to join forces. The FG&G insignia was found on platters from Dion, Freddy Cannon, Chubby Checker, and Little Eva. However, in 1964 when Beatlemania blossomed into the British Invasion, the horizon of pop music rapidly changed. Domestic artists were by and large left in the wake of U.K. imports, including Herman's Hermits, the Dave Clark Five, the Rolling Stones, and the like. They then struck upon the idea of reinventing themselves in the alter egos of three brothers named Miles (Feldman), Niles (Gottehrer), and Giles (Goldstein) Strange, aka the Strangeloves. Their records reflected the concurrently mod ethos, resulting in the aforementioned classic oldies and a handful of lesser-known tunes with a similar energy and Britpop vibe. Released in 1965, the I Want Candy album placed in the Top 200 (number 191) and included a few covers such as the Stones' "(I Can't Get No) Satisfaction" and Johnny Otis' "Willie and the Hand Jive" -- the latter of which can be found here. They continued issuing 45s through 1968, but none would have the impact of their earlier selections. Collectors should be aware that the full-length version of "Night Time" is featured on this anthology, while the more difficult to locate 45 edit and mono mix is on Nuggets: Original Artyfacts from the First Psychedelic Era, 1965-1968. 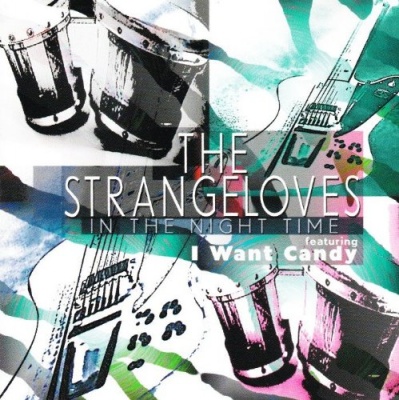 In the Night Time Album Information