The fruit of a one-off collaboration between ex-Deep Purple bassist/singer Glenn Hughes and journeyman guitarist Pat Thrall, Hughes/Thrall is full of the energy of early-'80s rock. With lyrics like "You got the power/Turn on the light" sung in best Ian Gillan fashion and buoyed by relentless grooves and Thrall's virtuosic guitar, this album is an overlooked gem. Thrall's use of the guitar synthesizer is very interesting. Throughout the album, he combines the muscle of hard rock with the textures of post-punk and new wave, as if Andy Summers were sitting around jamming with Eddie Van Halen. Take, for example, "Beg, Borrow or Steal." The verse is pure new wave, with its straight-eighth synth chords, but it soon gives way to the sleazy rock of the chorus. Much of this sound may in fact trace its origin to Queen and Rush, but listening to Hughes/Thrall in its historical context places it firmly in the same territory in which Billy Idol was to have so much success. The performances by the two leaders are fantastic. Hughes' voice and bass playing are in fine form, and Thrall exhibits a healthy dose of Allan Holdsworth in his playing. The mix, handled by none other than Andy Johns, tends to bury Thrall's guitar a bit, but the drums and bass sound great for an album from this period. This is aggressive and vital hard rock, with a healthy dose of texture and subtlety that prevents it from descending to the depths of self-parody that so much rock from the late '70s and early '80s was unable to save itself from. Worth searching out. 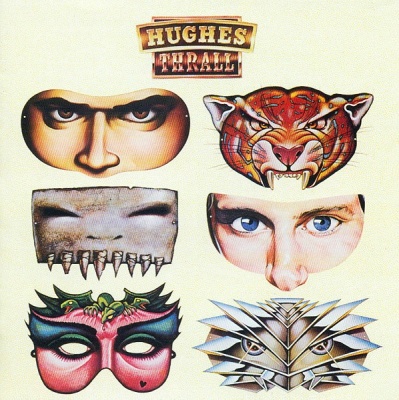