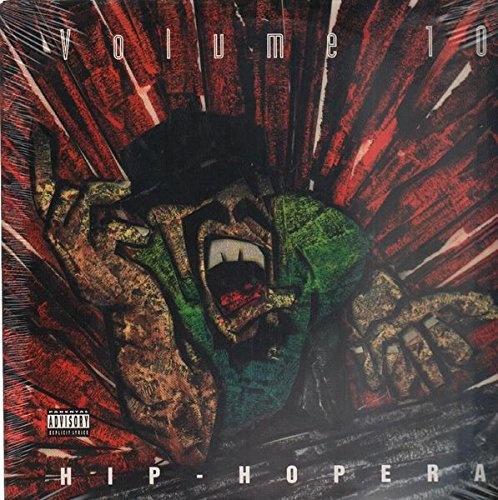 With the release of "Pistolgrip-Pump" as his debut single in 1993, Volume 10 set quite an ambitious precedent for himself. As the song and its off-centered interpretation of "More Bounce to the Ounce" captured anthem status across the States, no one quite knew what to expect next from the self-proclaimed lyrical Heavyweight. When his full-length album Hip-Hopera hit stores in 1994 it sure enough put a schizophrenic spin on what was quickly becoming typical Los Angeles gangsta rap. As a product of the Goodlife open mic sessions, Volume 10 utilized psychedelic-tinged beats provided by the likes of the Baka Boyz, Fat Jack, and Bosco Kante to cover almost every topic under the South Central sun. While hood warfare gets the flamboyant treatment on tracks such as "Knockoutchaskull" and "Flow Wood," a more introspective approach is taken on "Where's the Sniper" and "First Born," which respectively tackle the topics of alcoholism and fatherhood. As a second single, "Sunbeams" didn't even come close to matching the reach of "Pistolgrip-Pump," but it did prove that a touch of nature could still be enjoyed among even the most tense of urban situations.