It isn't hard to understand why Nirvana and Pearl Jam knocked pop-metal out the box in 1992 and 1993; the pop-metal market was saturated with generic, predictable clone bands that were content to emulate Guns N' Roses, Poison, Warrant, or Mötley Crüe instead of trying to develop a sound of their own. A backlash was inevitable, although it's unfortunate that MTV had to throw the baby out with the bath water and punish pop-metallers in general for the sins of the clones. Dangerous Toys was among the casualties of that backlash, which is regrettable because it was one of the more impressive bands that came out of the style in the late 1980s. Produced by Roy Thomas Baker in 1991, the rockers' gutsy second album, Hellacious Acres, comes across as more sincere than a lot of the pop-metal CDs that came out that year. Comparisons to Guns N' Roses, Mötley Crüe and L.A. Guns are valid -- lead singer Jason McMaster, in fact, often reminds you of GNR's Axl Rose -- and, yet, Dangerous Toys had an energy of its own. These headbangers were from Texas, home of ZZ Top, and even though the Lone Star influence isn't all that overt, you can hear it if you listen closely. Lyrically, they resorts to the usual pop-metal clichés about bad boys, bad girls, and promiscuous sex, but the Texans do it with more heart than many of the pop-metallers of the late 1980s and early 1990s. Hellacious Acres isn't considered Dangerous Toys' most essential album; most fans will tell that you that the band's self-titled debut album of 1989 is its best release. But all things considered, this is a respectable sophomore effort. 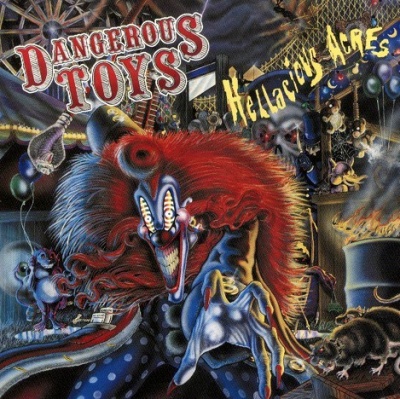