Happily, it is not the responsibility of this review to address in detail the train wreck that was the 1979 film adaptation of the stage musical Hair. A complete misfire conceived by a screenwriter, Michael Weller, and a director, Czech expatriate Milos Forman, who did not seem to have the slightest familiarity with hippies, the '60s, America, or even Broadway, the movie was miscast with supposedly bankable young film stars of the day (Treat Williams, John Savage, Beverly d'Angelo), and the essentially plotless libretto of the stage version was replaced by a contrived Hollywood script in a textbook example of how not to do an adaptation. But never mind the movie itself. The concern here is the music, and at least it can be said that, unlike some of the disastrous movie musicals of the 1930s and '40s, this one actually does use the score as heard on Broadway, and it has been supervised by its composer, Galt MacDermot. That said, however, MacDermot has not been able to resist the temptations of a higher budget and the changed musical styles a decade removed from his initial work. As soon as the thumb-plucked funk bass begins in "Aquarius," it's apparent that MacDermot has been listening to '70s disco, and when a horn chart comes in later in the same song, his desire to soften this version of Hair is revealed. The score was always eclectic (and somewhat satirical, musically as well as lyrically), but with more money to spend, MacDermot makes it more so. "My Conviction," once accompanied by a mere piano, now has a big string arrangement; "Hare Krishna" ends with steel drums; and there's a new song, "Somebody to Love," that is a cry-in-your-beer country ballad complete with pedal steel guitar. The poor casting of the leads is not much of an encumbrance to the soundtrack album since all of them sing adequately and none of them is heard from very much. Hair is an ensemble work with a lot of singers, and there are some very talented ones here, including Don Dacus, later known as Donnie Dacus and a member of Chicago; Nell Carter; Annie Golden of the new wave band the Shirts; Charlotte Rae; Ellen Foley; Laurie Beechman; Betty Buckley; Melba Moore; and David Lassley, who must have lost an "s" to become David Lasley, the solo artist and backup singer for James Taylor. With all that vocal firepower, the soundtrack to Hair is far more acceptable on disc than the movie is in theaters. [The album was released initially as a two-LP set, RCA Victor CBL2-3274. The first CD reissue, RCA 3274-2-R, released in 1989, was abridged, with the tracks "Party Music" and "My Conviction" deleted. They were restored on subsequent reissues.] 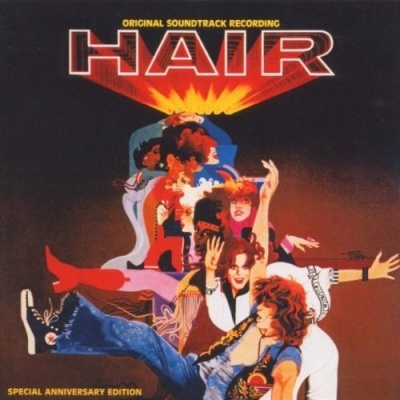