At some point between In My Mind and this album, tracking Pharrell's accomplishments became more difficult than ever. His 2013 alone must be considered historic. That February, he accepted a Grammy for his role in Frank Ocean's Channel Orange. March brought the release of Robin Thicke's "Blurred Lines," a Pharrell production that eventually topped the Hot 100. In April, there was Daft Punk's Pharrell-fronted "Get Lucky," a number two hit. From June through December, the Top Five of the Billboard 200 featured ten albums that involved him, including the number ones Random Access Memories, Blurred Lines, Magna Carta...Holy Grail, and Beyoncé. He subsequently earned seven additional Grammy nominations and took home three awards -- presumably stowed in one of the compartments of his hat -- the following January, including the one for Producer of the Year, Non-Classical. Just prior to the March 2014 release of G I R L, "Happy," one of several songs he granted to the soundtrack of Despicable Me 2, topped the Hot 100. That carefree soul throwback appears here, almost smack in the middle. It doesn't sound out of place in a set of upbeat, candy-coated pop-R&B that is relatively modern-sounding, laced with some elements of R&B from the mid- to late '60s and that sweet late-'70s to early-'80s spot. One highlight that owes more to the past is "Gust of Wind," a midtempo disco-funk Daft Punk collaboration filled with soaring strings and one of Pharrell's most effectively wistful/yearning turns. On the sunny "Brand New," he adds horns and shares vocals with Justin Timberlake, and they deal out some rare male self-objectification: "Like the tags still on me, jumpin' 'round in your bag." Much of the material is gentlemanly -- appearances from Alicia Keys, Miley Cyrus, JoJo, and other women add to the approach -- but this wouldn't be a Pharrell album without some goofball moves. "Hunter," like a funkier and tinnier take on what he did for Usher's "Twisted," is steeped in his charm-way-over-ability falsetto and cartoonish boasts with topical references. "Gush," what sounds like an outtake from the first N.E.R.D. album plus strings, begins with "Make the pussy just gush" and references "Light Your Ass on Fire" while proclaiming "My mama didn't raise me that way" somewhere between. Compared to his albums with N.E.R.D. and In My Mind, this is easily Pharrell's second most enjoyable album, just behind the original version of In Search Of... from 2001. It's fun, frivolous, and low on excess. 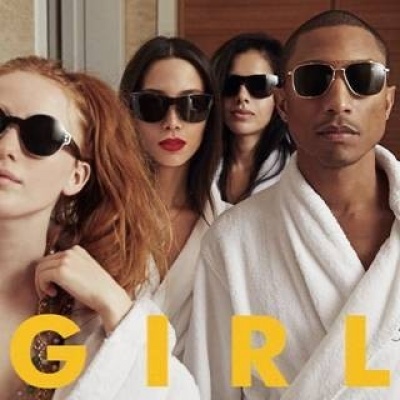