Fragments of a Dream Review

A collaboration between the Andean cultural troupe Inti-Illimani, classical guitarist John Williams, and flamenco guitarist Paco Pena spawned from a number of ad-lib performances between the various musicians in London. Those performances were essentially Inti-Illimani performing as usual, with guest solos by the guitarists. This album, however, was written specifically with the collaboration in mind. As such, there is a distinct weaving of styles. The flutes and small strings of Inti-Illimani are often backed rhythmically by some careful guitar plucking. Conversely, there are passages of classical guitar with punctuation provided by the Andean instruments. It's a decently soft affair either way, not necessarily making heavy use of the Andean motives, but incorporating the Andean style into the larger set of a hybridized music. The horns sometimes act as punctuation to short runs of Andean-based sound, and sometimes play in a largely classical context. The charangos and violins do much the same. The core instruments from both stylistic sides only make the crossing from time to time, usually playing in a normal manner and letting the context affect the manner in which they're heard. As such, it makes a nice twist on the usual classical guitar repertoire basically, but probably isn't really the right choice for those looking for a piece of world fusion. Interesting, but largely bland. 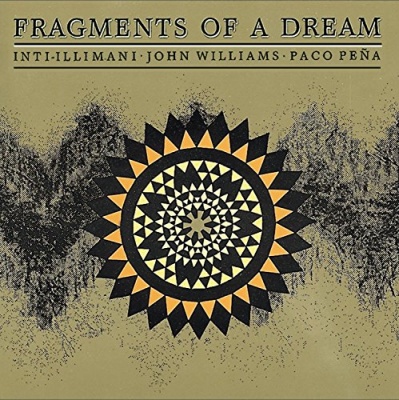 Fragments of a Dream Album Information