Gabriel Fauré's Nocturnes reveal his great debt to Chopin, and this is pronounced in the selections Jean-Marc Luisada performs on this 2004 compilation. Sensitivity to textures, delicacy of line, and a private tone are features Fauré derived from the master, and one might easily mistake the melancholy Nocturne No. 1 for one of Chopin's preludes, or the moody Nocturne No. 2 for one of the etudes, so strong are stylistic resemblances. Yet there is an instability in Fauré's music, due to his more ambiguous harmonies and wider ranging modulations, which clearly mark the Nocturnes as an outpouring of late Romanticism, rather than early. Close listening reveals the differences, and these become more apparent when one is fully immersed in the album. Luisada's sympathetic performances subtly evoke the fin de siècle atmosphere of Fauré's music, and the hothouse fervor of the Nocturne No. 12 and the intense chromaticism of the Nocturne No. 13 dispel all confusion. Fauré's searching tone also comes through in the Sonata No. 1 for violin and piano, which Luisada and violinist Laurent Korcia deliver with remarkable clarity and heart-piercing sweetness. RCA's sound is fine in the Sonata, though it seems a little veiled in the Nocturnes. 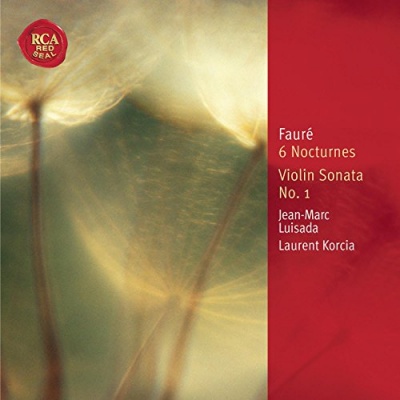